Why Anxiety Is So Prevalent in the Chronic Illness Community

Stay with me on this one. It’s complicated, and there are so many layers. But if I simplify it too much then you will lose the complexity of the link between chronic illness and anxiety. In fact, it is less of a link and more of an enmeshment. These two like each other a lot and they merge and entwine themselves, often making it impossible to separate them.

I have a chronic condition called Ehlers-Danlos syndrome (EDS). It is a rare but relatively neat package in that it is a genetic, physical condition where a small piece of my DNA is not quite what it should be. But it affects the structure of collagen, and because collagen makes up about 72 percent of the human body, the expression of those genes and the ways they affect my life are huge.

Skin, blood vessels, tendons and more are all made up of collagen, and so those parts of my body are all a little bit more fragile and floppy than most people’s. We need our blood vessels to be strong and to squeeze tight to keep our blood pressure up, which means I generally have low blood pressure. We need our tendons to keep our joints from overextending and dislocating, which means that not only do I overextend and dislocate my joints throughout my body, but over time that damage becomes too severe to heal and I lose the strength in that joint. And like you, I have lots of joints. One at a time, I am losing mine. And damaged joints are excruciatingly painful…all the time.

But I also have anxiety issues. They are complicated on their own, never mind wrapped up in chronic illness. I have anxiety from childhood and abuse issues, but for the sake of this explanation, I am going to put them aside for a moment and only talk about anxiety and chronic illness.

At the root of anxiety, there is fear. You fall off your bike, you can’t stand on your left leg, it is swelling, it is turning purple, you are in agony, so you go to the doctor for help. This is normal; I would do this too. But it is also a little scary, no matter which way you look at it. Fear comes from an endless list of things, but around anything medical, these top five justifiable fears are just the tip of the iceberg for me:

1. Fear of the physical pain I am in, that it could get worse before it gets better or that the pain cannot be taken away.

2. Fear of the diagnosis (will this be long-term, permanent, constant or will it even just cause you regular problems forever onwards?).

3. Fear of no diagnosis or that it can’t be fixed.

4. Fear of procedures and treatment (we all know from infancy that needles hurt, cleansing of wounds hurts, physical examinations and surgery and tests can be painful, etc.).

5. Fear of not being heard or understood or not being able to explain the problem well.

When it comes to chronic illness of any kind, the above five issues are not an oddity in our lives, but an almost constant source of very real fear and anxiety at one level or another.

I write a lot about vulnerability exhaustion, and how constantly having to expose our bodies and souls to professionals who may or may not be kind, gentle, willing to help, thoughtful is exhausting. This too, of course, brings with it a second level of justifiable fear.

Many of us with rare or undiagnosed conditions have unusual medical complications, outwardly invisible symptoms or we do not have a concrete diagnosis yet, so this medical fear and vulnerability fear is even greater. Naturally and understandably, over time this becomes a trauma which can ultimately, especially when ignored, escalate to become quite severe.

Throw mental illness, abuse or any other kind of trauma into the mix and even more layers of fear pile on. And these are very common elements as the statistics among the general population are extremely high, but the weak and helpless are at a much greater risk again.

It isn’t hard to work out at this point then how anxiety, panic and fear can become a debilitating part of our already complicated medical lives.

But there is more. Fear is considered by many to be emotional rather than physical, so it is more often than not brushed aside and dismissed. I believe, however, that fear is more physical than emotional (although emotions play a massive role) and, to add fuel to the fire, the symptoms of anxiety and panic attacks can often mimic many life-threatening situations, and again, the cycles become deeper and deeper.

So our fears, panic and anxiety symptoms can go quickly unnoticed or unaddressed in the whole scheme of the “way more important” medical issues. They are often left to fester and grow without even ourselves noticing.

So many times I have been rushed to the hospital having collapsed suddenly with little to no measurable heart rate. This is considered (and rightly so) critical, especially when it is a doctor or paramedic who has called the ambulance. It is a scary situation to be in. Mind-numbingly scary, actually. I think few people would think fear should not exist in this situation.

Being in the ER surrounded by doctors and so many other patients in distress is scary. Then there are drips, injections, monitors – you name it. Panic in the eyes of both doctors and nurses make it even worse despite their reassurances. My adrenaline pumps, my stomach drops, my fingers tingle. It is all justifiable fear. Test after test occurs and everything comes back “normal.” After a couple of hours, my stats return to a safe level, and they can’t find anything wrong with me. They need the bed. They send me home. With nothing to go on but a warning to be more careful, to avoid foods that could cause reactions, to avoid taking medications I am unsure about. To get to the bottom of whatever it is before it kills me.

They send me home with fear and a barrage of unanswered questions. Their job is done. They are ER doctors; they can’t help me. The next time my GP gives me a new medication my heart races, the adrenaline pumps. What if this new medication will cause me to collapse? What if there is something in it that the ER doctor said could kill me next time? She can’t answer that question because no one knows. My anxiety grows, and I still don’t even know it is there.

Eventually, my anxiety grew to the point where it was diagnosed by my (fabulous) GP. I was glad, not of the diagnosis as such but that my fears were recognized. I thought it would bring answers but it didn’t. It made everything worse. For you see, many people, professionals included, use anxiety as their “get out of jail free” card.

“Ooooh,” they say. “You have anxiety? Well, then that is what is happening to you. You need to pull yourself together or stop being so fearful or calm down or see someone else. We have done all we can for you – now go and see a shrink.”

A broad brush stroke that suddenly, out of nowhere, wipes everything else away with it.

Our bodies are emotional and physical, and we all know that in theory. But many experts specialize in one or the other rather than both.

The ER doctors who had poured their energies and skills into trying to save my life suddenly washed their hands of me when the first and slightest hint of anxiety was placed on the table by a well-meaning (and kind, I might add) cardiologist.

I instantly switched from being a medical case to being a mental health case.

This happened over a decade ago, and as the spiral descended it eventually became debilitating and I was struggling to function at any real level. I was sometimes able to hide it well, but at other times I lost consciousness before I even knew what had hit me and I would rush off to the hospital in an ambulance, creating a huge scene that I did not want to be a part of, making me hide my symptoms even more.

Check out my book on how I conquered my anxiety! 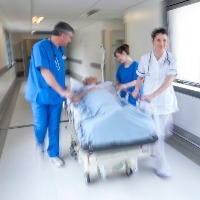