Melania and I are honored to light up the @WhiteHouse this evening, for #WorldAutismAwarenessDay. Join us & #LIUB. https://t.co/o07NPQTCyK pic.twitter.com/7zzwSwBdZK

“On World Autism Awareness Day, we highlight the importance of addressing the causes and improving the treatments for autism spectrum disorders (ASDs),” President Trump said in a statement. “We also recognize the importance of identifying ASDs early in a child’s life and of understanding the obstacles faced by people living on the autism spectrum.”

According to the Los Angeles Times, Sean Spicer, the White House’s press secretary, said Trump lit the White House blue as a promise to Suzanne Wright, the late wife of his friend Bob Wright, both of whom cofounded Autism Speaks.

Following Trump’s tweet about the White House’s color change, some tweeted the President applauding him for acknowledging autism.

@realDonaldTrump @WhiteHouse This autism mommy says, Thank you very much for lighting it up blue for ‘Autism awareness Mr. Trump and first lady you’re amazing ????

@realDonaldTrump @WhiteHouse My son said thank you President Donald Trump . My son has autism and I thank you too ????????

@realDonaldTrump @WhiteHouse Thank you Mr.Donald Trump for caring for us Americans with Autism

Others were not impressed by the White House’s tribute.

@realDonaldTrump @WhiteHouse You know what’s better than shining a damn light on the WH? Policies that don’t ruin the lives of people with autismhttps://t.co/0fJMKXwJDv

@ananavarro Turning on some lights is nice. What about all the folks who have autism who will lose care, resources and much more if Trump got his way??

Paul Ryan received a similar reaction after he tweeted a photo of himself wearing a blue puzzle piece pin.

Criticism of both Trump and Ryan comes following their support of the American Health Care Act (AHCA), which would have repealed the Affordable Care Act and limited Medicaid and services for people on the autism spectrum.

@SpeakerRyan Are you serious? You fight to repeal the ACA when most plans dont cover behavioral health and the medicaid expansion is the only security..

@SpeakerRyan Empty gesture. you’ve shown us where you stand by your proposal to cut services to people with autism.

What’s your take? Let us know in the comments below. 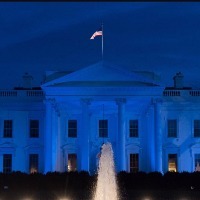