The Hole in Hopelessness After My Son's Death

The worst feeling in this world from my perspective is the feeling of utter hopelessness.

When my son left this world, I found myself entrenched in this dark prison where I found no hope. There was nothing I could do to bring my child back to me. It was a state of complete powerlessness and helplessness.

I was never a “controller,” yet I managed my household, had my own business, was a sub-contractor for an international company and worked a second job as an independent employee — all while raising four children. I had three teenage boys along with a little girl who was 10 years younger than the youngest boy. I could switch hats at the drop of a dime. I was a successful business woman with three computers in my office so I could work from home. I had three phone lines so I could quickly change hats depending on which phone was ringing. I could comfort my little one as only a Mommy can, and I could discipline the teen boys if necessary. I look back on those times and believe what I accomplished was by the Grace of God.

Suddenly, I was thrust into a world I could not navigate. Nothing in my life could have prepared me for burying my child. If I was an oak tree, I was instantly transformed into a weeping willow. I could barely function. I became helpless, incapable of focusing on the simplest task of putting together a meal. The feeling of helplessness drove me into a pit of despair. Auto-pilot had become my default mode. Out of desperation, I dabbled in self-blame simply to “feel” as if I did have some degree of control over the situation. I welcomed the false guilt because it offered some element of relief from the utter helplessness and hopelessness.

In one of my son’s poems, he wrote:

The tears that now make their path

Down my newly, older face, do not scar

But cleanse the wounds of my past.

They do no harm, but heal.

They are the tears that are shed only by a few

Fortunate to find hope through a hole

I needed to find that “hole,” instead of the quagmire into which I had fallen.

In the words my son left behind, the answer was “hope.” But I had to travel through that tunnel of hopelessness to get at it. There were no short-cuts, no detours, no available by-pass.

Like Alice, I feared I would first drown in my own tears. Unlike Alice, I would not wake up to one day realize it had all been a dream. Rather, I needed to believe that hope was possible.

Jude’s book, “Gifts from the Ashes,” is available at Direct Textbook. 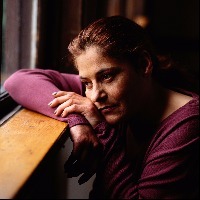