How a Caring Dentist Helped My Daughter With Down Syndrome

In my head, I imagine it’s like fingernails raked across a 90’s chalkboard, or a metal fork scraped across a plate. Either way, my daughter’s body language spoke fear.
The way her hands and face shook — extreme anxiety.

In the “typical” world, a trip to the dentist’s office would be a simple inconvenience. But not if you have a teen with sensory integration dysfunction.
Sensory integration involves the way a person receives input such as touch, sound, smell, and even movement and balance. If the brain has trouble interpreting this type of information, then one might have trouble with simple daily activities, such as eating or brushing teeth.

My daughter Tayler has a diagnosis of Down syndrome and is considered nonverbal.  She has had difficulty with sensory integration since birth, and her sensory-seeking behavior has sometimes been a struggle for her.

I had no idea that our dentist would know exactly how to help her.

Since Tayler was born, her sensory difficulties have included grinding her teeth when anxious, frequent body movements, aversion to hair washing, and most recently large crowds and noisy areas. I can see the pain and anguish on her face. Since she is unable to express her thoughts verbally, I use my mother’s intuition and her body language to make my best guess as to how she is feeling. I often see frustration mixed with pain. I hurt for her sometimes.

Today was an unforeseen struggle, but Dr. Ralph Nixon was prepared. I’m not sure what the scientific term was for his technique, but my guess is they didn’t teach it in dental school. As Tayler and I walked into the room, Tayler sat in an orange, metal chair. The room appeared like any other typical dentist office, full of tools and gadgets. Dr. Nixon, his nurses and I spoke quietly and discussed the possibility of panoramic x-rays. My decision was “No”, because it requires one to be completely still, and I knew Tayler already showed signs of feeling stressed.

After our discussion, I gently attempted to get Tayler to lie on the exam table. She refused.

I tried to persuade her, “OK Tayler — it’s your turn. It won’t take long,” I explained.
She pulled her arm away and dropped down to the floor. We have visited Dr. Nixon for years, but I guess today in teenage-fashion, she decided to exert her independence. I tried my best to pick her up, but at 100+ pounds, it was impossible for me. Dr. Nixon tried to assist, but Tayler refused again.

So like any sensitive, intelligent, empathetic human being, Dr. Nixon decided to track and adjust.

He walked over to Tayler and sat beside her on the cold ceramic floor to talk to her. He asked Tayler if she was OK, gave her several pats on the back, and explained that we needed to check her teeth.  He made multiple attempts to engage her, and make her smile and laugh. He seemed to sense her difficulty and fear of the exam, and gently praised both of us for her dental health.

“She has good dental hygiene. Do you help her?”

I answered, “Well, sometimes, because she hates brushing so much.”

Dr. Nixon then said, “That’s wonderful that you help her take such good care of her teeth. It shows.”

Once Dr. Nixon finished speaking, he sat in a random, nearby chair. He seemed to think for a while, then inquired, “Do you think I can examine her right here?”

I replied with an emphatic “Yes please!” He then gently rested her head on his knee. I remained seated in the floor holding Tayler’s hands. In an obviously uncomfortable position and with his nurse’s assistance, Dr. Nixon proceeded to give my daughter a dental exam.

I stared in disbelief and briefly zoned out, because my heart knew this world would be such a better place if more people and professionals were like him. We had both made attempts to change Tayler’s sensory response and her fearful reaction in that moment, but Dr. Nixon changed his response. He took the time to empathize, be in the moment, and simply care. I hope other professionals will learn to “think outside the box” and do the same.

After the exam was over and it was time to leave, Tayler effortlessly stood up and kissed Dr. Nixon on the cheek. She started to giggle. He hugged her.

No parent likes to see a child in pain. But today I felt content knowing there are truly good people and professionals who care about their patients, and are willing to go against the norm to help. 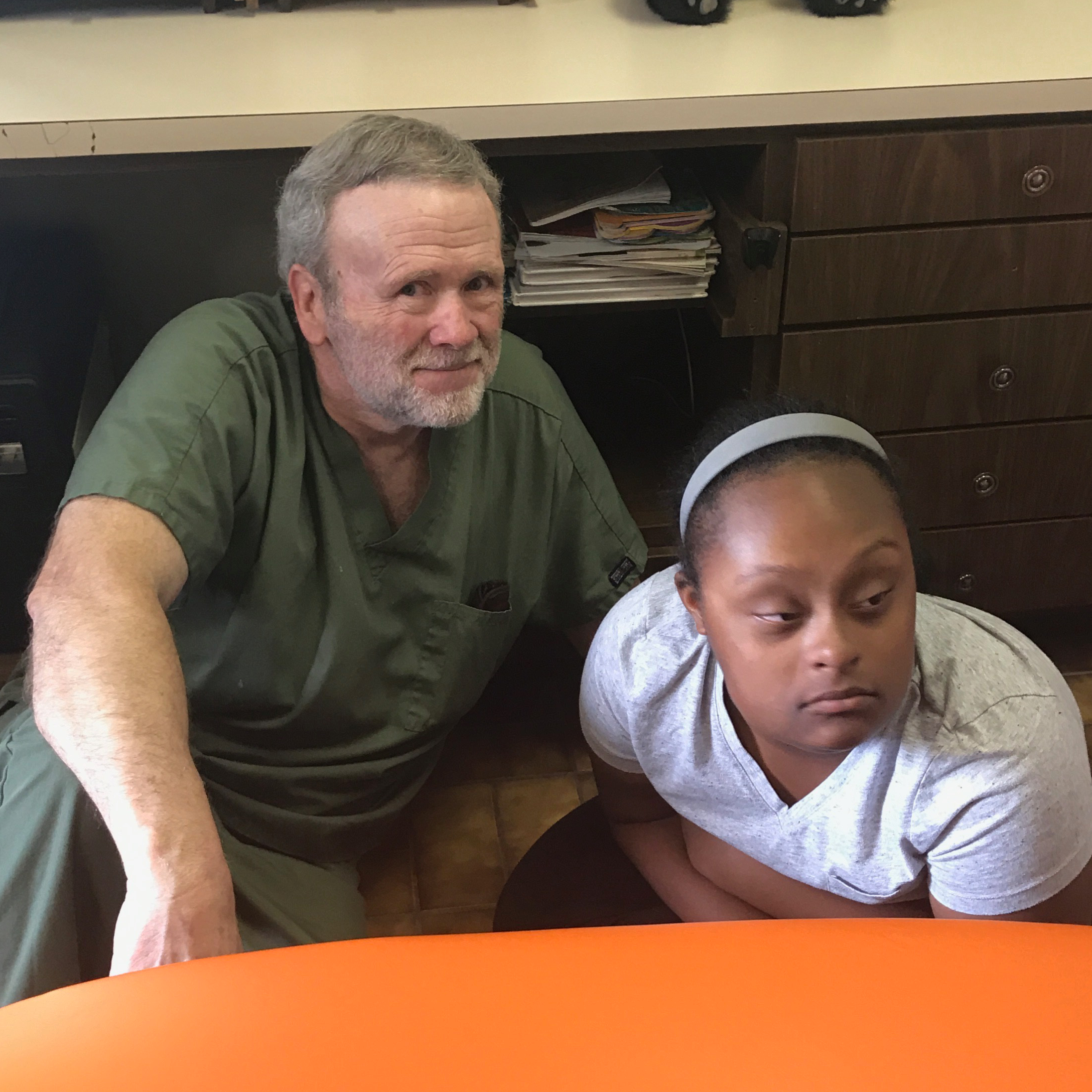