The 'Quiet' After Losing My Dad

I wanted to be sure to mark the day my dad died on my calendar. Between my ADHD and days lost to summer, I worried I’d miss it, forget to call my mom and let it slip by without the appropriate reverence.

As I began to type the event name I paused.

I feel as if we try to gloss over death. To — if we have to mark it — at least focus on the peace of it all. His “passing” from this life into another, perhaps. My mom thinks he’s come back as a hawk. Rather quickly I might add.

Why was it so hard to type what it is? Was there a nicer way to put it? Do other people put these “anniversaries” on their calendars? Why, while I write this, does the tip of my nose tickle and crinkle in some half-ass reflexive attempt to quell the flood brimming in my eyes?

Before this anniversary I’ll have to cross May 31st. Dad’s 71st Birthday has been haunting me for months. Every time I scan my April, May, June calendars for science nights, doctors’ appointments and days off, there it is — the little gift icon and the implication that there should be one more year, that next week there should be a life to celebrate instead of one to mourn. Father’s Day is in there, too. My first without a dad.

It all happened so fast. Cancer will do that.

A year ago, May 20th he had the colonoscopy I’d wished he’d gotten in March. A year ago, my mom and dad heard the news that after decades of “GoLYTELY,” decades of colonoscopies, decades of family history and risk, they’d found something more than a polyp, something they suspected was malignant. It wasn’t until they knew more and had a plan — triage, damage control, share news — that they told my sister and me they’d found something. That was the day after his birthday, June 1st.

Surgery was scheduled for June 20th. But when a CT scan the next week showed metastases the plan changed. PET scans, oncologists, biopsies, chemo plans, more biopsies and ports. Suddenly June became July. And the cancer that had spread from his colon to his pancreas and to his liver had more than another month to use his bloodstream as a superhighway. July 21st was the first chemo treatment. Followed by an ER visit, blood transfusion, second treatment, 911 call, a second ER visit.

I flew cross-country to see him on August 10th. He died August 15th.

My dad was a man who modeled honor to more than just his own kids. At work, he quietly moved mountains. His “humility, wisdom and humor” have even been memorialized in a school-wide award. He was a loving son and brother whose strength to shoulder the devastating illnesses and loss of his mother, his father and two younger brothers was incredible. And my mom loved him more than anyone.

He was funny with unparalleled dry wit and a belly laugh to boot. A laugh I shared the distinct honor of being able to trigger with the likes of Night Court, Bob Newhart and Clark Griswold. I still smile thinking about lying in bed at night as a kid, I could tell what he was watching from the time of night and how heartily his paunch laugh echoed upstairs. That laugh lives on in my youngest child.

But he was also an incredibly quiet guy. So quiet, in fact, that for months at a time he was a voice barely heard in the background. He was the afterthought “Dad” scribbled into a birthday card my mom had picked out, stuck in front of him, pen in hand and sent herself.

Though he might not be front and center, he would email me out of the blue to share an article he thought I’d find interesting about food allergies or school reform or politics. He was the dad who sent deposits out to four of the seven colleges I’d applied to because I melted when I realized I was too overwhelmed to choose. He was the guy whose photographs — of him and I walking up the church steps and dancing at my wedding, and of him looking into my daughter’s eyes as a baby — I will cherish more than just about any other captured moments. He wasn’t gratuitous with his love. Some might say he was plain stingy. But the truth that maturity and loss have taught me is that his love was always there. It never left or faded. Just like him. It was there, and in the quietest of moments you could see it, perfectly clear.

Maybe that’s what’s holding me back, getting in the way of the acceptance of the finality, of the fact that my dad will forevermore be remembered on August 15th — the fact that this “quiet” is different. He’s not just busy. He’s not just quiet. There’s no chance of a sudden email. There are no more moments with him to capture. He’s gone.

The silence echoes in my head. Somewhere, in the quiet, he’s there. 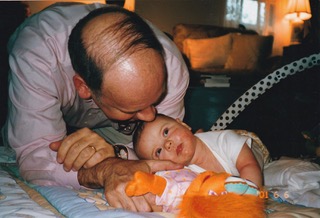 Share
or  Copy Link
Link copied to clipboard.
Be first
79