What You Should Know Before Casually Saying 'Anxiety Attack'

When someone says they “literally had an anxiety attack” when something stressful happens, try thinking about this next time. An anxiety attack are two words I would love to never say again, never have again and never hear again. It hurts when you hear someone use a term that is utterly devastating to you as a joking phrase. This is what my anxiety and obsessive compulsive disorders are like. Next time you are stressed out and you say you had a panic attack or anxiety attack, reevaluate your phrasing. Please, on behalf of everyone with a mental illness, just think before you speak.

It’s being worried, actually petrified, for no reason at all.

It’s your brain telling you anything and everything is wrong and you have no idea why.

It’s a fog inside your mind that’s impossible to clear no matter what you do.

It’s your heart racing and palpitating when you aren’t doing anything more than watching TV.

It’s thoughts racing in your mind faster than you can possibly keep up with and an overwhelming feeling to the point you have to give up and zone out of reality.

It’s not being able to fall asleep because you keep replaying the day in your head and what you should have done differently.

It’s not being able to relax because you keep thinking about a mistake you made three years ago that only you remember happening.

It’s getting to an appointment an hour early to make sure you don’t disappoint whomever you’re meeting since there’s always a chance of being late.

It’s checking on your little brother three times in the middle of the night because every noise you hear is him being kidnapped.

It’s texting your dad when he’s alone downstairs and you hear a thump so you can make sure he’s OK and isn’t having a heart attack with no one around to help.

It’s not being able to make a phone call because there’s a chance they will ask you a question you don’t have the answer to.

It’s not answering a phone call because you didn’t have the chance to prepare for the conversation yet.

It’s locking yourself in your room because being around anybody would take too much energy.

It’s washing your hands a literal hundred times a day with the fear there could still be a germ left.

It’s sanitizing before and after you are in every room, every store and even your own house.

It’s washing your hands after you get out of the shower.

It’s sanitizing after you washed your hands.

It’s having to eat food in even numbers.

It’s noticing things that are out of order or out of place and if you don’t tell someone or fix, it will continue to nag you in the back of your mind for the rest of the day.

It’s having to scratch your left leg because you scratched an itch on your right one and it would be uneven if you didn’t.

It’s picking at your nails and surrounding skin until your fingers are raw and bleeding.

Its picking the bumps on your arm that leave permanent scars to remind you of your illness every time you look in the mirror or when you catch someone stare at the marks.

It’s your heart rate spiking when a stranger talks to you because it could lead to having to answer a question, or even worse, deal with a confrontation.

It’s ever muscle in your body being tense at all times of the day.

It’s telling your parents and your doctor.

It’s researching, learning, and understanding what you are living with.

It’s being diagnosed with mental illnesses for over two years, but living with them for 21. 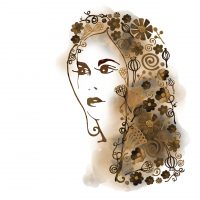