The following is an excerpt from the book, “Strength: Lives Touched by Cystinosis“

Our story starts in much the same way as many other cystinosis families. Everything at birth was “normal” and soon we settled back at home with a tiny baby adjusting to our new life. But like many of the cystinosis beginnings, it was about to change. When my son, Chandler, turned about 10 months old, we noticed he had a thirst that could not be quenched. When we held him near the kitchen sink he reached at it, as he knew that’s where the water was. He guzzled it like I have never seen. We immediately called his pediatrician. She ordered labs and then it was a waiting game for the results. When the tests came back she called and informed us we needed to head to the only children’s hospital in Delaware, A.I.Dupont Hospital for Children.

In the days to come it was a steady flow of doctors and nurses trying desperately to put the pieces together. Seemed like hourly they wanted more blood or took him for another test. Day after day it continued, lots of people, but no answers. After nine long days a “suspected” diagnosis was finally made, but we had to be transported to another children’s hospital in Pennsylvania for confirmation. Two weeks later it was confirmed: Chandler had cystinosis.

Once back home and adjusting to our “new normal” we began our own research of what cystinosis was. The Internet can be a place full of knowledge and explanation, but can also fuel fears and worries. We learned all the do’s and don’ts of this illness and what to expect in the coming years. We learned of experimental treatments for corneal crystals and the history of cysteamine.

We also learned there were several advocacy groups already established doing wonderful things. These groups seemed to have everything covered from fundraising, to raising awareness, to funding research. We read many stories from other families who were involved in these groups and I honestly didn’t think I needed to do anything as they were already doing so much. I knew I couldn’t make a difference as I am only one person and my comfort zone really isn’t much larger than your average cookie. So for the next eight years I did nothing but treat my son and kept faith that all the ones who were involved in the battle against cystinosis would continue. I really thought all that could be done for cystinosis was already being done. So why get involved?

Over this time period I continued reading stories of families who held fundraisers. Certainly not something I had ever attempted before, but I found myself constantly thinking maybe I should. I really doubted I could pull it off or raise much money. Little did we know Chandler overheard our conversations and told us we should try because we were already doing a small event at our home every Christmas anyways. So the next thing we knew, we were planning our first ever cystinosis fundraiser.

During the last few weeks before this event, I found myself frantically handing out flyers to anyone willing to take one. I hung them in store windows, left them on counters, even had them on our local news. I wanted it to be a success and it turned out to be just that, but not in the way I thought.

You see, our particular fundraiser has a lot of moving parts, a lot of details, required many hours of planning and also brought a lot of stress. I actually convinced myself this would be my first, and my last. That’s was until my phone rang…

The lady on the other end of the call had many questions, and even though she never came out and said it, she had me convinced she wanted to donate. She requested we meet at her home a few hours later, and right on time, I was ringing her doorbell. As I waited for her to open the door, I expected to meet a nice, understanding person, who after a few minutes of talking would give me a donation and then I’d be on my way. I was in for a surprise.

When the door opened, I was greeted by an angry lady, yelling at me and waving one of our flyers in my face. She basically screamed at me, asking how I expected her to believe what was on the flyer. She continued with her rant and told me cystinosis was not even a real illness because she had never heard of it, “It’s all made up,” she said, “So you can get people to donate and you can pocket the money!”

I was floored. Nearly speechless. I assured her it was a real illness because my son had it and I even directed her to a couple websites to prove it. She told me the websites were also created by me to make my lie even more believable. I ended this rant by saying, “Ma’am, if you don’t feel comfortable donating, then please don’t.” I then left her step and drove home.

I have not seen or spoken to this lady since, and now that my anger has far gone, I do feel I owe her a huge debt of gratitude. For it was her who gave me a true look as to just how much work needed to be done. There is still a great need for raising awareness and educating the public about this illness. If not for her, I’m not sure I would have continued my quest to change the future of this illness. I was convinced to never do another fundraiser again, due to the amount of work it took to do our first. Now we have just completed our third and most successful one yet. If not for her, I would likely never have known that cystinosis was so unheard of. If not for her, I would not be where I am today. If not for her, I may have given up.

So to the lady in the big brick house…..thank you! 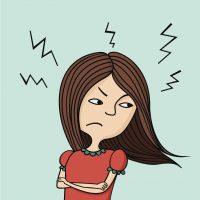