This Land Was Made for My Son With a Disability, Too

The Fourth of July is a time of reflection on our nation’s past and present. As a mom to a son with a disability and former history teacher, I often marvel at how far our nation has come in one generation as it relate to the human rights of individuals with disabilities.

When Thomas Jefferson wrote we have the right to “life, liberty and pursuit of happiness” in the Declaration of Independence, he probably wasn’t thinking of people like my son Troy, who has Down syndrome. Still, this document and our nation’s constitution has been used as proof that my son deserves a life of choice and self-determination with needed supports.

When I was born in 1982, individuals with Down syndrome had a life expectancy of 25-years-old. Many still lived in neglected and abusive institutions, were denied life saving surgeries, and underwent forced sterilizations as approved by the Supreme Court in 1927.

One generation later, in 2012, when my son, Troy, was born life expectancy had more than doubled to 60 years old. Many laws contributed to this amazing feat, one of which was Medicaid. The social program was a bipartisan solution to healthcare for the poor, and was signed into law by President Lyndon Johnson in 1965.

The healthcare proposal that recently passed the House of Representatives and is currently in the Senate would cut Medicaid by $834 billion dollars over the next decade. Half of those cuts would come from “per capita based caps.” This means, instead of a federal and state partnership, the federal government would cap the amount of money they give to states to a fixed amount. Cash-strapped states would likely cut Community and Home Based programs first.

In a time of growing distrust of government, you need to know that the federal government has made a huge positive impact on the lives of our nation’s most vulnerable citizens. My son is proof of this progress. At almost 5-years-old, Troy, can do everything his neurotypical twin brother can do. He’s potty trained just like his typical twin, can read and sound out simple sentences like most kids his age, and plays on the same tee ball team as his typical peers.

What you may not realize is the supports he receives during early intervention and in his inclusive preschool (like PT, OT, and speech) are partially funded through Medicaid. When my son reaches adulthood, Medicaid provides job training, transportation, and independent living supports through local Dayton programs like Project Search. At birth we put our son on Ohio’s Medicaid waiver waitlist for these adult supports and services. As Medicaid stands right now, that waitlist is 18-25 years long. What will happen if these cuts are approved? Likely we’ll never see the end of the waitlist; if we do, the services will likely not be what they are today.

Ohio Governor John Kasich opposes the Senate bill and in a letter with three other GOP governors stated: “It calls into question coverage for the vulnerable and fails to provide the necessary resources to ensure that no one is left out, while shifting significant costs to the states.” Over 700,000 Ohioans would be impacted by Medicaid cuts if approved.

Troy and I met with Senator Rob Portman’s staff in June. We shared our Medicaid story, but staffers gave us no indication of how Senator Portman felt about the disability community. After the Senate delayed the bill, Senator Portman came out in opposition to it, citing the opioid crisis here in Ohio. For sure, drug treatment and mental health will also be negatively impacted, but the disability community must not be ignored. Call Senator Portman or your own Senators today at (202) 224-3121, remind them how far we’ve come as a nation in the treatment of our most vulnerable citizens. Tell them to save Medicaid, and vote NO to any cuts or caps on the program. 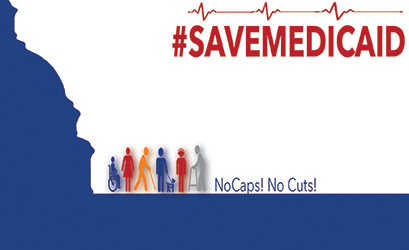 Follow our journey of advocacy and inclusion at Inclusion Evolution.