Our Family Secret That Made a Difference In My Son's Health

If you’ve come to our house lately you may have noticed some changes. There are signs all over food in our kitchen saying, “Jack only” and there’s a lingering smell in the air.

We had someone working on the alarm system last month and he asked me what kind of tea I was making. When I told him it wasn’t tea, he said with a big smile on his face, “I didn’t really think so.”

I reacted by doing what I’ve done for the last six months. I just politely smiled and changed the subject. I haven’t wanted to discuss it, feeling people might judge, but last week I was forced to disclose our family’s little secret.

Unless traveling abroad, we’ve never had to present any ID for the children, and no one had asked us for them on the way to Florida from New Jersey. “They’re kids,” I said, but as the words came out of my mouth I suddenly realized our son, Jack, isn’t a kid anymore — he’s 18. Crap.

“I’m sorry I can’t let him through security without a photo ID.”

“Sir, we don’t have one. I didn’t know he needed one. They didn’t ask us for one when we left NJ.”

“NJ should have asked. I really can’t let him through.”

My family was looking at me. The people behind us in line were glaring at me. I felt myself beginning to sweat (although that may have just been a hot flash). I started wondering which one of us would stay back with Jack and how long it would take to mail the passport, when I realized we did have something. I opened my wallet and pulled out the one form of photo ID I have for Jack.

The man took the card and held it under his fancy light. He then looked up at me as he called his supervisor over. They both looked down at the card, mumbling to each other (and giggling) then looked up, “OK, Jack. Have a great trip.” They each gave Jack a high-five as we wheeled him away.

Apparently, medical marijuana cards are an accepted form of ID by the TSA.

My son, Jack, has a rare disease called Adrenoleukodystrophy (ALD). It has left him with a complicated and often uncomfortable life. Over the last year, I’ve read stories about people with ALD and similar diseases having success with medical marijuana (cannabis). I discovered cannabis has many very beneficial medical benefits: anti-nausea, suppresses seizure activity, anti-inflammatory, anti-anxiety, combats neurodegenerative disorders. All this with limited risks, and certain varieties do not even cause a “high.”

We’ve tried countless things to help Jack. There is no “Guide to Treating People with ALD.” We’ve tried everything from drugs designed for Parkinson’s Disease to speech therapy on a horse (it’s called hippotherapy and Jack loved it, but it got rather expensive). Marijuana seemed like it was worth a shot. Jack isn’t working any heavy machinery or driving, and we are not worried about pot being a “gateway drug.” After all, Jack can’t open the fridge by himself and he has already used Codeine and Oxycodone and Vicodin (and on and on) without issues.

So, I made an appointment with Jack’s doctor to discuss introducing marijuana to our list of medications. Even though I was confident it was a good idea, I still felt nervous approaching the subject; as if I was recommending that my son do something scandalous. But as soon as I mentioned it, Jack’s neurologist agreed and we started the process. Two more doctors (including a psychiatrist), $200, and six months later, we were mailed our medical marijuana cards and a list of dispensaries in New Jersey.

The day after receiving our cards in the mail, Jack and I found ourselves on a suburban street in a neighboring town going into an unmarked building to purchase our first batch of an experiment. We were greeted with warm smiles and an unexpected education. As rigorous as it is to get a medical marijuana card in New Jersey, once you get it, there is very little hand-holding by doctors or by the state. It’s up to you to figure out what type of cannabis to buy, how much to give, and how to administer it. For the last 10 months, I have been trying different varieties of marijuana, making oils and butters and baking treats for Jack. After all, Jack couldn’t smoke even if I thought it was a good idea. So, here I am, a suburban housewife, using the same oven that I’ve used to cook my Thanksgiving turkey, to make my 18-year-old son pot brownies and cookies.

Never in a million years did I imagine myself at 47 making pot brownies for my son. I’ve never been much of a baker or a “baker.”

I’d be lying if I said I never experimented with marijuana, and I’d also be lying if I said I never inhaled. Marijuana was around much of my high school and college years and has even popped up at an occasional dinner party in our suburban town, but I have always preferred the buzz of a little too much vino to the buzz of a joint being passed around a circle. And, as wild as my social life was as a young person, I’ve always been uncomfortable with breaking the rules. As mainstream as pot was and has become, it’s always been illegal, but that is changing.

There has always been a stigma attached to marijuana, and it’s because of that stigma that I waited for months before revealing our secret to our friends and extended family. I wanted to be sure I’d done all my homework on the topic and I wanted to be sure it worked. At first I thought I might be imagining it, but thanks to keeping track of doses, behaviors and sleep, we quickly found there was no denying the benefits of our new medication. Now our family is less and less concerned with that stigma. Since we have introduced marijuana to Jack’s list of medications, the positive results with sleep, appetite and spasticity have been profound and we are now solid in our belief that marijuana is a remarkable drug with a host of benefits. If it helps Jack, it’s likely to help others and we need to spread the word.

We are not alone. Recently, top scientists at the National Academies of Sciences, Engineering and Medicine weighed in on marijuana and its health effects. After considering more than 10,000 studies, they concluded that marijuana is helpful for pain relief, muscle spasms related to MS (a disease not so different from ALD) and for treating nausea and vomiting associated with chemotherapy. It’s time we all take a look at our medicine cabinets and realize they are filled with far more harmful things than cannabis. Our experience with Jack and having observed how cannabis is helping him, has convinced me more than ever of the fact that our country needs to see positive changes in policies regarding marijuana.

As of November 2016, 28 states and DC have legalized medical marijuana. That’s more than half of the United States. It seems like we’re heading in the right direction, but when I started working on our taxes, I found some disappointing news: “You can’t include in medical expenses amounts you pay for controlled substances (such as marijuana, laetrile, etc.) that aren’t legal under federal law, even if such substances are legalized by state law.”

Marijuana is still a Schedule 1 substance which means that, “It currently has no accepted medical use and a high potential for abuse.” Half of the US says otherwise! We can deduct all of Jack’s doctor’s bills and medical supplies, including personal care items, syringes, even all of the supplies for his service dog, but the $540 we spend for an ounce of cannabis every month for the medication that was prescribed by his doctors and is working can’t be included as a medical expense?

This is illogical and our society needs to adapt to what science is telling us. Medical marijuana works. Fortunately, our family has the financial resources to continue to have medical marijuana as part of Jack’s daily regimen, but many others do not have that luxury. When is the tax code going to catch up with science?

Now that we are outing ourselves as cannabis supporters, we are going to do our best to spread the word. Hopefully, if more people see the benefits of this medication, the laws will continue to move in the right direction. After all, if the TSA can approve a medical marijuana card as a legitimate form of ID, can’t the federal government see it as being a legitimate medication? 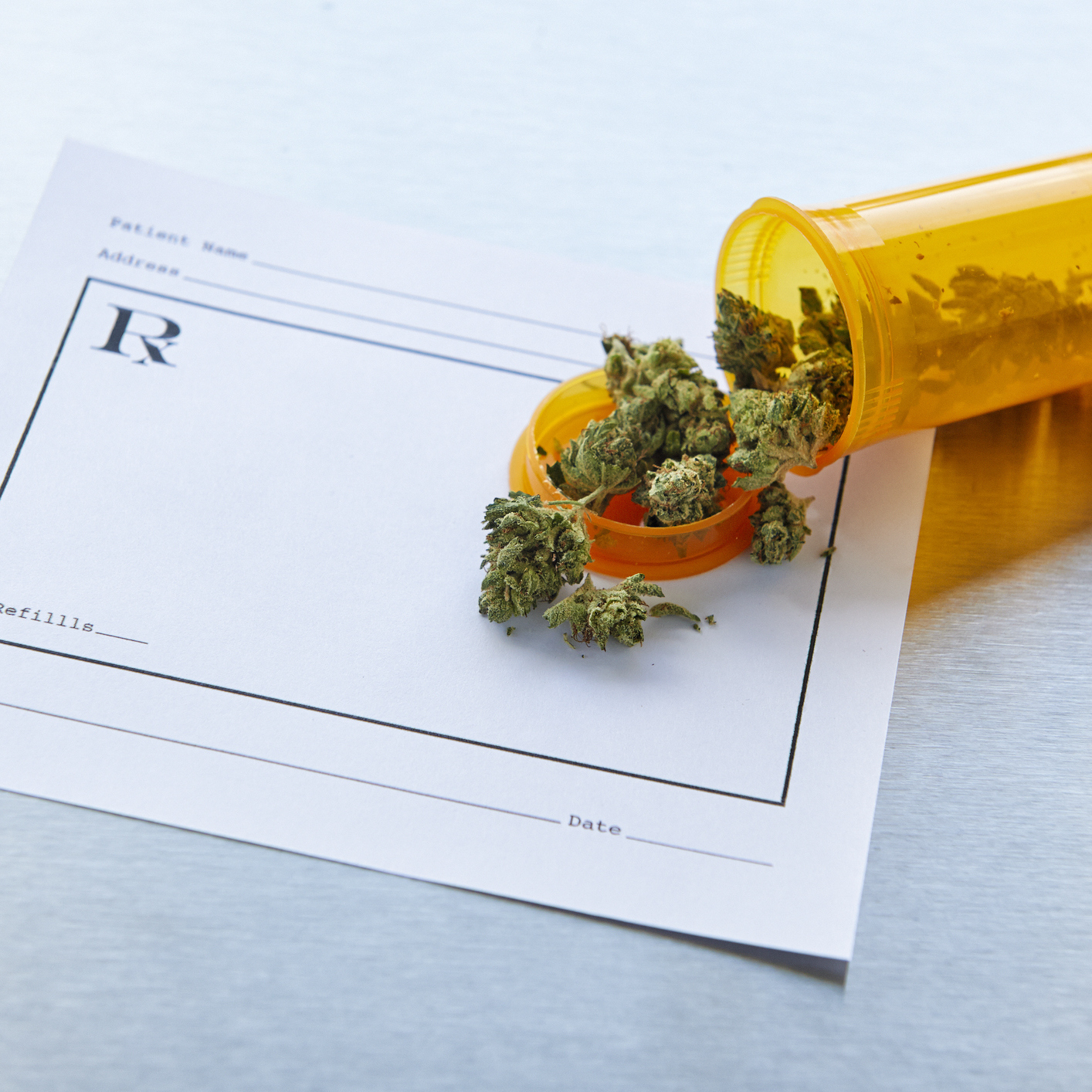