The week, the non-profit OCD-UK campaigned to get a product taken off the shelves of the UK-based store The Range, which they say made light of obsessive compulsive disorder (OCD), a mental illness that can have a serious impact on those who have it.

@TheRangeUK Why make money of the back of mental illnesses like OCD ? Shame on you pic.twitter.com/7V7FqVh192

Using the hashtag, #IHaveGotOCD, some took to Twitter to explain how products like these can be damaging to those with mental illnesses.

Hello @TheRangeUK #IHaveGotOCD NOT a CAKE disorder, a disorder that destroyed my 20s, left me with unbearable obsessive intrusive thoughts. pic.twitter.com/rMPiMK3LIf

Where is the joke in OCD? I'm one of your customers @TheRangeUK and I promise you there really isn't a joke. Also mocking mental illness ????

In a blog post on OCD-UK’s site, spokesperson Ashley Fulwood wrote, “Every time somebody misuses the OCD acronym for a ‘joke,’ a little part of [someone who has OCD] dies inside, the stigma that the ‘joke’ creates can be life-limiting, because people suffering with OCD close down and are left feeling they can’t talk to anybody.”

The organization says there’s a difference between someone finding humor in their own OCD, and stores that make money from products trivializing the disorder. OCD-UK started bringing attention to the product on Sunday, August 13, but said The Range didn’t respond to their request until Wednesday. After getting through to a senior executive, OCD-UK wrote in a follow-up blog post that the OCD-themed product was pulled.

We have been assured that this is a permanent withdrawal of the items, and they are committed not to create further distress so they have pledged to destroy the items.  OCD-UK wish to go on record by thanking the retailers senior management for recognising the seriousness of the issue and taking the decisive action and commitment to resolve this.

The Range – An update and thank you to their senior management for listening, and to you for your help and support. https://t.co/379CvyDbrE pic.twitter.com/VHTK1OqgEw

This is not the first time the OCD community has rallied against a product. Two years ago, people were outraged when Target sold a sweater with a similar theme: Obsessive Christmas Disorder.

What’s your take? Let us know in the comments below. 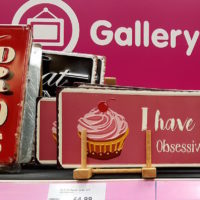