I’m going to tell you a little story. When I was around the age of 5, I sat down to watch a movie. The title? “Mary Poppins.” I was completely enthralled by the adventures that were playing out in front of me. The magical tidying up game, the horse race that took place in a chalk drawing, the tea party on the ceiling. Sure, the two young children and the dancing chimney sweep were great, but there was someone else who particularly stood out to me.

A little while later, my mom sat me down and to watch another film. This was one was slightly more serious than “Mary Poppins,” but she was there again. The person who had stood out to me before. Apparently her name was Julie Andrews, and boy was I smitten.

I became totally obsessed with “The Sound of Music” and would often sit in front of the television watching the singalong version and reenacting the scenes. Later on, when I found out that the musical was actually a play first, I dreamed of being a Von Trapp child. On the West End, on Broadway, in an amateur dramatics performance, anywhere.

However, deep down, I knew that this would be very unlikely, if not impossible. I’m not talking about the audition process, I’m talking about the fact that I have spastic diplegia cerebral palsy and use a wheelchair. So for the past 12 years or so, I’ve had to be content with just singing the songs at home.

Julie Andrews has always been a star in my eyes, but recently she and her daughter Emma did something gargantuan in terms of making the arts more accessible for the disabled. “Julie’s Greenroom” premiered on Netflix on 17th March. The show is aimed at preschool children and in each episode Andrews enlists a celebrity to help teach her Greenies (who are puppets built by The Jim Henson Company) about various areas of the performing arts. One of the Greenies, Hank, is a very talented pianist and happens to be a paraplegic. He therefore uses a wheelchair. It is also important to note that another of the Greenies is gender-fluid, and one is Latino.

When I first heard about the show, I immediately thought back to the little girl in leg braces. My parents have always taught me that my disability should not dictate my life, and that I can be whatever I want to be. Of course, I have always been terribly comforted by these sage words, but nothing can compare to seeing someone like you being represented in the wider media. Although I may be 17 now, seeing Hank on screen filled me with a joy that is usually only reserved for “my favorite things.”

Anyone who is remotely close to me knows that one of my biggest passions in life is making people aware that the theater needs to be accessible for all, and I don’t just mean via accessible seating arrangements within the auditorium. The arts give a voice to the voiceless, and allow them to feel as though they are being heard. Not only this, but I believe the arts are a great outlet in times of strife. Whenever the seemingly endless amount of medical appointments is beginning to get me down, I turn on a Original Cast Recording. If one of my down days (there really are not that many) happens to coincide with a show I have tickets to, I relish those two or so hours in which I can escape to another world.

In creating “Julie’s Greenroom,” Julie and Emma have done something that may end up saving lives. If any of the children watching the show are also wheelchair users, they will be able to see that the world of performing arts is a completely viable outlet for some of the frustrations they will inevitably encounter in their everyday lives. I am in no way implying that every disabled person will experience suicidal thoughts, but it is vital for these children to realize that they can channel their anger in a positive way. The introduction of the show may also make theater companies and playwrights (both amateur and professional) realize that in order for disabled people to get the most out of the arts, they need to make their work more universally accessible. A few more plays that feature characters who are wheelchair users would be a great start.

Another winning element of “Julie’s Greenroom” I have yet to mention is that Andrews sings. Yes, you heard me, sings. After a failed surgery quite some time ago, Julie has turned her attention to expressing her love for the arts in other ways, such as writing. In my opinion, the fact that she sings a little bit in the show helps demonstrate to the young audience that you shouldn’t let adversity stand in the way of what you love to do. I would understand and be happy without hearing Julie Andrews sing again. She has often expressed how much joy she finds in writing, and how the loss of her voice has allowed her to peruse other hobbies. But something inside me flips when she does treat us to the odd few notes. I am immediately back in my living room, as a 5-year-old girl whose ears are being gently caressed by the voice of an angel.

I don’t think I will ever be able to repay Julie and Emma for all they have done. Although I may no longer be part of the show’s target audience, I will always have a special place in my heart for “Julie’s Greenroom.” I am completely aware that Julie will probably never read this, but I just felt the need to say thank you. Not just for this new Netflix show, but for the profound impact she has had on my life. You may think I am exaggerating when I say this, but I cannot imagine what my life would be like without influence from the great Dame Julie Andrews. She is a constant that has connected three generations of women within my family, and for that I will always be grateful. 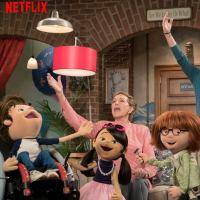