What You Need to Know About Living With OCD

Living with obsessive-compulsive disorder (OCD) is far from what is usually portrayed by the media. Usually, you see a person who washes their hands over and over again or sorts their clothes by color. While these things can be part of OCD, there’s actually a lot more to it.

OCD is also quite an individual disorder, meaning that some people have certain symptoms while others don’t, and the degrees to which they affect your life can vary. I am very careful about germs, washing my hands often or using antibacterial gel, and I avoid eating food made by someone else. If I go to a restaurant and see dirty cutlery or glasses, I’m immediately put off. This sounds quite “normal,” doesn’t it? The problem is how much this affects my state of mind. If I have a friend over, I give them a cup I would never use. If they use our cutlery, I obsessively clean every item several times. If I don’t do these things, I’ll constantly think about the germs that might be on that cup or that fork, and will avoid using it.

I’m also dependent on routine. When I shower, I have to follow a ritual: shampoo, face wash, upper body, rinse, conditioner, lower body, rinse. I put my make-up on in the same way every day. It’s natural for me to follow this routine; I don’t even have to think about it, it’s just the way things are done. While some things actually do make sense – foundation before concealer! – others weren’t developed out of logic, but rather the obsessive need to have order in my life.

When I’m feeling particularly anxious, I go into tidying overdrive. I’ll adjust and readjust picture frames, the tea caddy, the magnets on the fridge. I also have to touch things repeatedly, with each side of each finger, until it feels right. My OCD number is five. It feels like a safe number. While writing this, because I’m thinking about it, I’m obsessively touching the keyboard. My hands feel wrong otherwise; I have to do it.

One of the problems with OCD is that it isn’t often taken seriously. There’s an extremely “dark” side of OCD that isn’t very well understood. Every time I drive past a cyclist, I have to check my mirror to make sure I didn’t hit them, even though I know I didn’t. When traveling, I obsessively check my tickets and make sure I’m on the right train. When home alone, I have to check the doors to make sure they’re locked before I go to bed. This isn’t just home security – even if I just locked the door, I have to check. If I can’t remember turning my straighteners off, I have to go back upstairs and check, even though I’m fairly certain I’ve never left them on in my life. This constant cycle of doubting myself and checking my previous actions leads to a heightened state of anxiety, and a desperate clutching at control.

OCD is a part of my life, and, for the most part, I don’t think about it. I just go along with my rituals, almost absent-mindedly reorganize the things around me, and let it carry me through my day. But when I’m under particular stress, I feel the OCD start to increase. The urge to touch in a certain way intensifies. I don’t ever think, if I don’t do this, X will happen, as some people living with OCD do, but I just know I can’t not do it. My hands don’t feel right until I’ve completed the touching ritual, which can last several minutes. It’s a distracting, frustrating part of my life.

It’s suggested that many cases of OCD develop during childhood, and I had a particularly traumatic time living in a violent household. I’ve read it can be developed as a coping method, for a child living with abuse to have something they control and can focus on. As a child, I always had to walk over cracks in the pavement with both feet, or if there was a bump in the carpet, I had to walk over it twice. I still feel that urge now, and although I try to ignore it, it feels as if my body betrays me, seeking out that second crack in the pavement for my other foot to walk over. OCD can mean a total loss of control.

So, how do you deal with OCD? Honestly, I haven’t mastered it yet. The touching ritual is the worst for me, taking over my mind and disrupting my day. Not trusting your own mind, your own memories, can take its toll. I personally get frustrated with the way OCD is portrayed within society and seen as a funny quirk, rather than a serious disorder that really impacts your life.

Share
or  Copy Link
Link copied to clipboard.
Be first
186 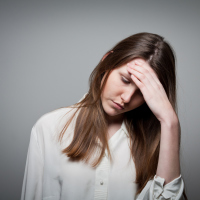