I’m kind of a late comer to the land of American Horror Story (AHS), but after watching the first season on Netflix, I was hooked. I loved the weird characters. The ghosts, the witches, the circus “freaks” just trying to exist in their own reality. I liked the fact that the stories always seemed to end, for the most part, happily — even if that meant everyone was a ghost, at least they were together.

But this season has me a little on edge. When the theme “cult” was announced and there were obviously clowns involved, I was hesitant. I have a minor fear of clowns as I think most people from my generation do — I blame it on the original “IT” movie. But I watched the first episode anyway, and something else bothered me more than the clowns. And if you haven’t watched the show and want to (and you don’t have anxiety) this is were the spoilers start.

The main character, Ally (played by Sarah Paulson) has severe anxiety. If you have anxiety, here are some things to be aware of:

1. It starts with the presidential election of 2016.

The first thing you need to know is that it opens on election night. This may not be important to everyone, but if you’re like me, the election and its aftermath caused a good bit of anxiety for me in reality. To be taken back to that moment was not a great feeling to begin with and although what follows is made up, and is to be a “worse case scenario,” parts of it are all too realistic. So if this past election caused you anxiety or if politics are a trigger for you, you may want to watch with caution or not watch at all.

There are a lot of trigger moments in this season. Not only are there clowns, there are moments were Paulson’s character, Ally, goes into overwhelming moments of being triggered. She may see a clown, a honeycomb, something else with a pattern and they show what she is “seeing.” Maybe a wonky shot of the honeycomb going in and out and overlapping. There are times when she drops to the floor her anxiety is so bad. This may be difficult to watch if you have experienced this feeling.

Paulson’s character, Ally, also has anxiety based hallucinations. She claims to be attacked by clowns in a grocery store, but the video cameras show her battling herself. While this metaphor seems fitting in the show, it can be upsetting to watch. Especially when no one believes the things she says she is experiencing.

4. There are scenes that show a lack of support for anxiety.

For many people with anxiety who are in a relationship, it is important that their partner is the biggest part of their support system. I believe a partner should know what types of things you experience with your anxiety so they know what to expect and how to react. In the initial episode of this season, a number of things happen where Ally’s wife Ivy seems to be more annoyed with Ally’s anxiety than understanding. As someone with anxiety, it is difficult to watch another person with anxiety not getting the support they need.

This season’s focus is fear. And not the scary, haunted, killer coming after you fear, but the overanalyze, worry about everything, everyday kind of fear. This season is anxiety, and for those of us who deal with anxiety every day, watching this show may compact all those feelings we already experience on a daily basis.

Whether this is the first time you’ve thought about watching AHS or you’ve been watching it from the beginning, I strongly suggest taking these things into account before you dive in to this season and avoiding it if needed. Self-care comes in a many different forms, and this may be one of them for you. 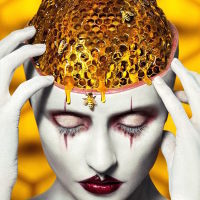