Eight years ago, Andrea Cummings, an online fitness coach from Greeley, Colorado, saw her mother recover from a melanoma diagnosis. Knowing she had fair skin and a lot of moles, she never hesitated to visit the dermatologist and have moles biopsied. A few moles even came back atypical and tissue had to be removed, but none were ever cancerous.

Then, about a year ago, Cummings, now 38, noticed a red spot on her chest that didn’t look like any of the moles she had removed. The spot would seep liquid from time to time, including a tiny bit of blood. The dermatologist said there was no cause for alarm, and it was probably discolored skin or a “sunspot.” 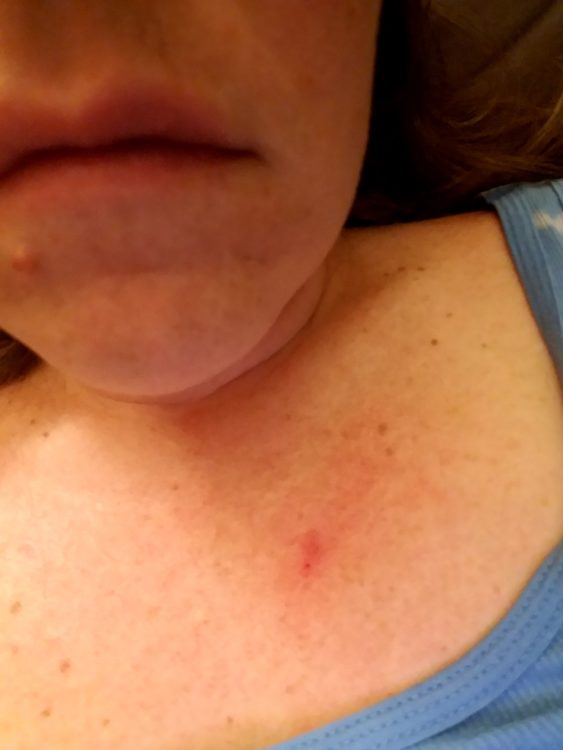 “I never felt 100 percent comfortable with that assessment,” Cummings told The Mighty, “But I told myself if a doctor had looked at it, it was probably fine.”

Months later she noticed a minor rash on her leg and back, and although it wasn’t anything major, she still wanted to get it checked out. Her regular dermatologist wasn’t available, so she got an appointment with someone from the same practice. The rash ended up being an allergic reaction, but she did get the doctor to look at the same spot on her chest.

The doctor said the spot looked “angry,” and wanted to do a biopsy right away. Cummings was going on vacation, so she set up an appointment for a few weeks later and had the spot removed. 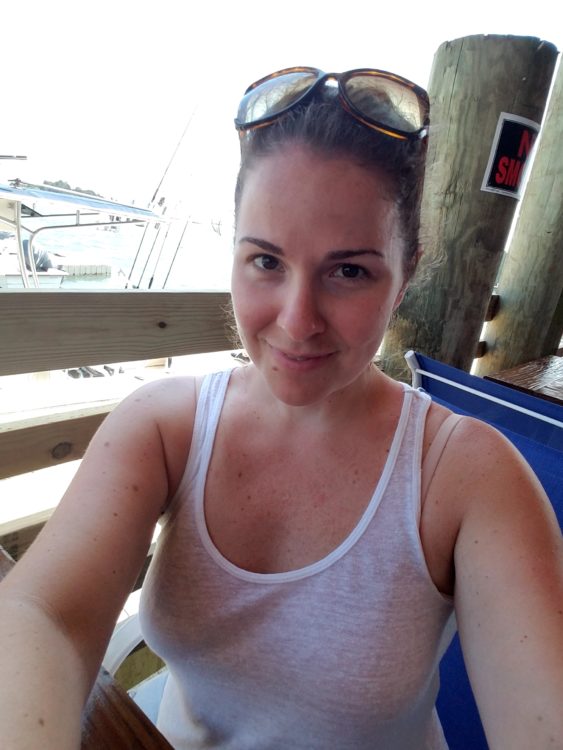 A week later she got the call that confirmed a superficial basal cell carcinoma, the most common type of skin cancer that, if left untreated, can spread to the bone and tissue beneath the skin.

Her doctor explained that because the basal cells were on the top layer of her skin, Cummings’ cancer was very common and easily treatable.

“She gave me the option of having the cells cut out or using a topical chemotherapy cream,” Cummings said. “I asked her recommendation, and she recommended using the cream to treat my entire chest, not just the affected area, in order to treat any other cells that might not be healthy.” 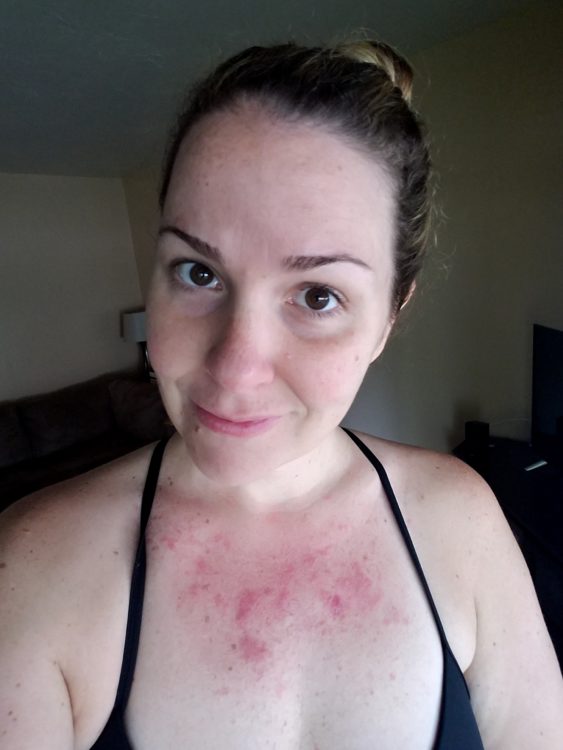 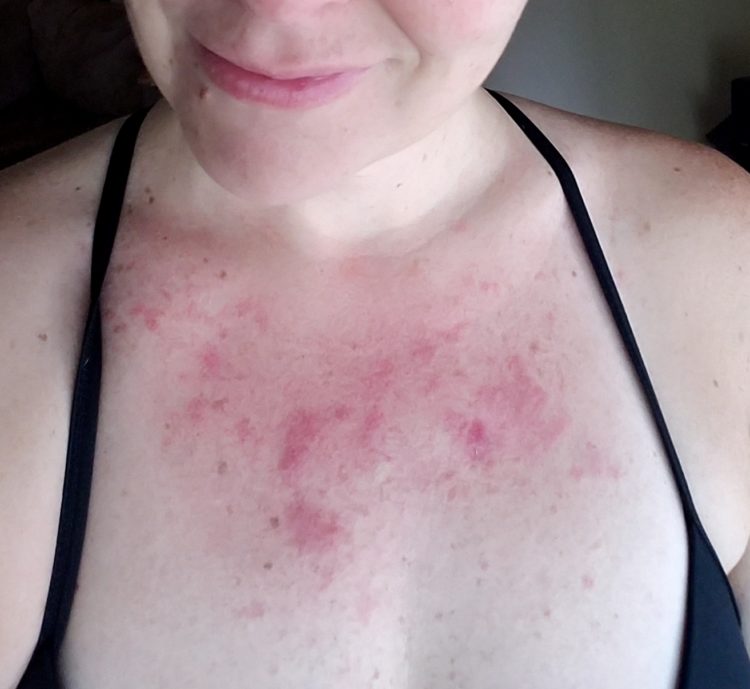 Cummings first applied the cream on Friday, July 28, and spread it over her entire chest. After seeing nothing happen for about a week, the area started to get red and itchy. Since it was the weekend she had to wait until the following Monday to reach her doctor and send her a photo of the area. By then, it was extremely red and uncomfortable.

Her doctor assured her the treatment was progressing nicely and she shouldn’t be alarmed because the chemo cream doesn’t affect healthy cells. The reaction she was having was because her chest was covered in damaged skin cells. 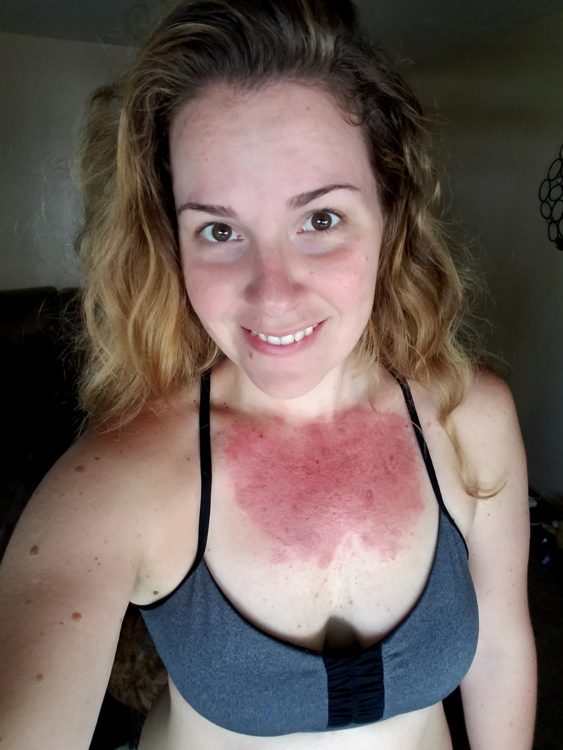 In the three weeks following her appointment, Cummings continued to apply the cream twice a day. Her chest blistered and oozed in some spots, and it was a bit painful, but she avoided further blistering of it by wearing open tops and rubbing her fingers lightly over the surface when it itched.

In the final week of treatment, everything started to heal. She’s noticed areas that had previously been red, raised and sensitive were now turning back into fresh, pink and healthy skin.

“On the last day of my treatment I only had a few spots that were still scabbed over, and by a week later, there was only peeling (like a sunburn) and pink skin remaining,” she said. “I’m almost a month out and while the area has healed, I still have quite a bit of red skin.”

Cummings will meet with her dermatologist next week to find out if her treatment was successful.

Although Cummings is already a fitness advocate, her weeks of skin cancer treatment have given her a newfound respect and appreciation for her health. She knows her diagnosis was not as serious as it could have been, but the pain, irritation and discomfort she experienced affected aspects of her life.

“If a minor, treatable cancer diagnosis could shake up my life in so many small ways, it makes me want to do everything I can to protect my health for the future,” she added.

Now Cummings encourages others to be proactive about their health, stressing the importance of following your gut and getting a second opinion:

I always felt the red spot on my chest didn’t look right, but I trusted the doctor’s judgment and pushed it to the back of my mind. While I did think about it from time to time, I never made a follow-up appointment to have it checked by someone else because I had been given the ‘all clear’ and felt uncomfortable asking for a second opinion.

When she isn’t on the field watching her husband coach at the University of Northern Colorado or catering to her to her two senior boxer dogs (one with a degenerative spine disease), she can be found at the beach, reading personal growth books, finding new restaurants, listening to music or taking trips with friends. 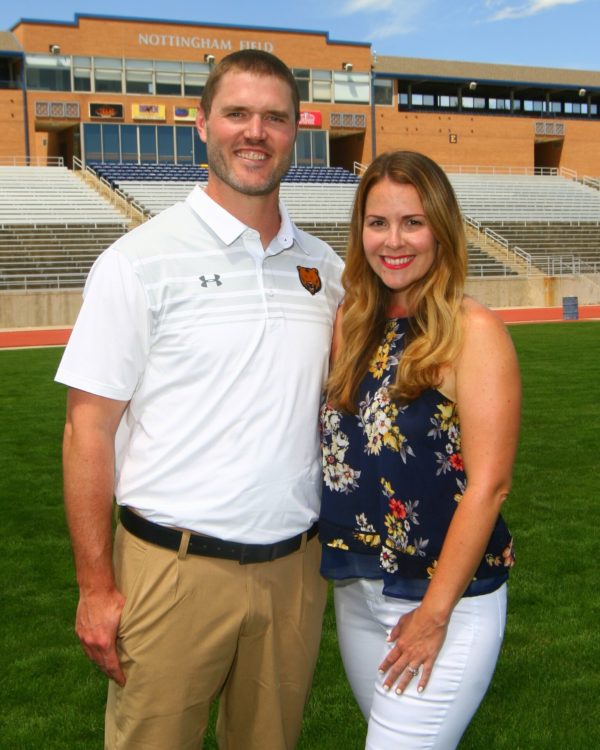 And speaking of friends, during her treatment, she learned many of hers had never even been to a dermatologist. Her advice to them, and to everyone: “Get your skin checked regularly. It’s a simple office visit and it could save your life!”

All photos courtesy of Andrea Cummings 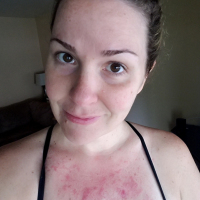