As I sit here writing this, my elbow leans on an armrest at a particular angle, so as not to bump the inner arm. My shirtsleeve is hoisted above the skin to expose two raw red wounds that look like burns where ripped off medical tape removed layers of dermis along with it. Though the area appears infected, I can’t put a bandage on it because the adhesive would further irritate. A bulging purple vein throbs at the crook of my arm, where today’s ultrasound revealed a two inch blood clot.

“Put warm compresses on it,” they advise.

“Easy for them to say,” I think. Whenever someone with lupus is told something is “common,” or “normal,” or that it “shouldn’t hurt,” we warriors know this is not true. Outlined strips of adhesive residue still form geometric patterns on my arms and torso after a total of 15 days in the hospital. “Lupus jail,” we call it. Fading bruises in various shades of purplish brown line my forearm and top of hand. And that’s just my left arm.

Ah lupus. Lupus. Lupus. Lupus. Why ya gotta go and make things so complicated? I went in to the hospital three weeks ago with a simple lung infection. OK, it wasn’t exactly simple. My lungs were lined with black mold and some eery bacterial infection lurked as well, and I felt like I was dying. But I mean, they had to bring out the big guns. IV anti-fungals and antibiotics. And in order to shoot the big guns, they had to use my cannons. My poor overworked and under-appreciated veins. Vessels that I recently learned really do fit a category called “lupus veins.”

Seven years of lupus and probably more IV placements and blood draws than there are veins in my body have rendered them nearly impassable. I’ve always been told I was a “hard stick,” but didn’t really get what that meant until this time around. And as I’ve concurrently gotten to know thousands of others with lupus through Facebook support groups, I’ve learned once again that I am not alone.

“I feel like a human pin cushion!” is the lupus battle cry heard round the world.

When I got home from my third hospitalization I noticed some posts of my fellow lupies with pictures of their poor poked arms. “After eight sticks, the nurse finally had to use a vein in my breast,” one caption read. I looked at those selfies of bruised and swollen forearms and tops of hands and saw my own.

I think there are various factors that compound this phenomenon for us pin cushions. The first thing that comes to mind is the pre-diagnosis stage of lupus. How many of us spent year after year seeing doctor after doctor getting test after test to get answers to our mystery disease? And how many of those tests involved blood draws? Or late night trips to the ER where some novice nurse got to practice jamming an IV into our arms?

I’ll never forget the first time I got to be a practice “stick” for a group of medical students at Temple University Hospital in Philadelphia. It was the week of my lupus onset, an awful scary time that nearly killed me. Each day brought in a fresh faced crew eagerly gathered around my bed. Confounded, the attending would announce a certain diagnostic test, and, after coming up empty handed on the bronchoscopy and echocardiogram, thought it time for an “arterial blood draw.”

“Do you mind if my students practice on you?”

“No problem!” I thought. After all, I was accustomed to pain tolerance from having been a long-distance runner since high school. “Plus,” I reasoned, “back when I was in beauty school I got to practice doing hair on little old ladies or on my willing classmates.” For which I still claim no liability But everyone has to learn somehow right? And every novice practitioner needs a willing model. Or victim, as the case may be.

“Sure!” I smiled agreeably, retying the straps on my sagging green hospital gown. “Ya gotta start somewhere!” I reassured the five young interns who looked sheepishly at me. “Bring it on,” I thought. It’s all for science.

Oh. My. God. The pain of an arterial blood draw is… let’s put it this way. There are delicate pathways in the underside of my skinny wrist which I’d never really considered until that moment. It reminded me very much of the scene in “The 40 Year Old Virgin” where Steve Carrell gets his chest waxed. I’d read that the actor chose to do a live take, which meant that anything that came out of his mouth during the shoot was authentic.

“Britney Spears!” Carrell blurted as the esthetician yanked a two inch swath of his heavy rug.

When a 20-something intern pierced what felt like a nerve in my inner wrist, I similarly shouted something random. To save from cursing.

“I love your engagement ring!” I exclaimed as I focused on her hand instead of my own.

The pain was like no other, except for what I imagined a hairy man would experience upon virgin waxing. In the beauty business, I’ve always joked, “How do you make a grown man cry? Wax him.” All I can say is, for anyone whose hair I might have ruined in beauty school, karma is an arterial blood draw.

Five excruciating sticks later and the attending stepped in. A bruise the size of Delaware bloomed on my inner forearm. And thus began my introduction into the lupus Hokey Pokey.

Even after we are diagnosed, we continue to get poked. We find ourselves riding the never ending carousel of blood work and ER trips. We roll up our sleeves where a tight band of thick rubber tourniquet squeezes around our bicep.

“You’re just going to feel a little poke,” they say. And, depending on the phlebotomist, and size of the needle, we do. Only feel a little poke. If we’re lucky. We either look away or watch in a blend of horror and fascination as they syphon 11 vials of blood from just one small port. The worst of these is the 6 a.m. wake up call we get when in the hospital where they come to take our blood. They flip on the light and cheerily announce, “Good morning! I’m here to draw a few vials of blood.” We have a special name for these bloodsuckers. Vampires.

I suspect only the chronically ill know what a phlebotomist does. I even have my own phlebotomist. At the IV infusion center where I go once a week. She’s my friend. I’ve found it wise to get along with those wielding sharp instruments. Hmmm. Maybe that’s why my 17 years of haircut clients were so easygoing. These days, when I tell people I have a phlebotomist they’re like, “You have a huh? What?”

Her name is Maris and she recently became a grandmother to twin girls. We exchange iPhone pics of her cuties, both human and canine, and of my fur baby. I also have my own cardiologist. And rheumatologist. And pulmonary doctor. An immunologist. And an infectious disease specialist. A dream team. If you’re lucky enough to get them on rotation when in the hospital. It doesn’t always work out that way. But a lupie can never have too many “ologists.”

Another thing I’ve found helpful, and sometimes life-saving, is to become friends with the nurses during a hospitalization. This past week I fell in love with my seasoned nurse, Mary. Mary was from Nigeria and the youngest of seven children. She was serious and humorous all at the same time and we compared our positions as youngest of a large family. “That’s why we get along with everyone,” we decided, “because by the time we were born, all our older siblings had already claimed their roles.” She and I hit it off and I was so grateful to have her.

Going through intense trauma together can really bond people. One particularly painful night, my veins had had it. Two weeks of medications through an IV and three days of the mothership of all antibiotics, my cannons had pushed to the limit. They’d already taken out the PICC line. Mine was a shorter midline which had reached up to my right armpit and had developed a staph infection at the site. Hence the IV bombardment coursing through my left arm.

Since I was a hard stick, Mary had to switch the IV to a small awkward vein at the bend of wrist on my right hand. As it turns out, the medication I was on is a “vesicant” drug. Something I did not know. But can be a blistering agent, which ended up feeling like acid being poured over my already inflamed veins. “I fell in to a burning ring of fire…” was went through my head. Fire! Fire! Help! Help! Nurse!

“I am stopping this medication right now,” Mary said decisively as she pressed a secret combination of keys on the IV machine pad. In her soothing Nigerian accent, she also explained to me how I had “lupus veins.”

“You see?” she demonstrated as she rubbed the top of my hand. “You see how your veins roll? They are ropy. This is very common with lupus. The outsides are hardened from inflammation and sometimes there are scars on the inside where a needle cannot get through. Your veins are also hard to stick because they roll away when we try it.”

Wow. I thought. Wow, wow, wow. This made a ton of sense. All my lupus friends complain of being a hard stick. For many of us dehydration compounds the elusiveness of these ropy suckers even further. I have a young friend with lupus and anti-phospholipid syndrome, which is basically sticky blood. It caused her to have a stroke at age 23. Because she is on blood thinners, she has to go in once a week to get her INR checked. Before each visit, she drinks tons of water to plump up her veins. Though my low platelet blood is just the opposite, I too suffer from dehydration. Any sickness will trigger a postural orthostatic tachycardia syndrome episode and I can’t get enough blood pressure in my thirsty veins. As my mom tells nurses and doctors at these times, “Kyra can drink all of Lake Michigan and she still won’t be hydrated.” 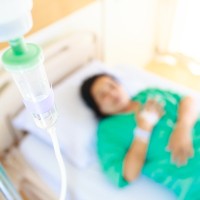