How Prednisolone Nearly Cancelled Out 20 Years of Positive Self-Image

With three daughters to raise, my parents always worked hard to promote positive body and self-image within our family unit. Ever since I can remember, my mum has tirelessly emphasized that we should accept our bodies as we are, ingraining within us a sense of confidence and pride about our appearance. In 20 years, my confident self-image had never been directly challenged, but boy, did that change when I encountered prednisolone!

Though I had long considered my body image unshakable, prednisolone turned out to be my kryptonite. I think the reason it hit me so hard was that it didn’t just change one part of me, it changed every part of my appearance – and there was absolutely nothing I could do about it.

In only a couple of months, I went from being entirely confident about how I looked to avoiding mirrors wherever possible. From the endless hunger to moonface, prednisolone broke me down like I never believed possible. Not only did it strip me of the self-image I had once believed to be unbreakable, but also it challenged me to rebuild a crucial part of myself from complete scratch.

I’ve always been lucky to have a very healthy relationship with food. I love to eat; it’s one of my favorite things in life. With the help of fast metabolism and regular sports and exercise, I’d never found myself in a position where that love could’ve been compromised.

But just after my diagnosis, I was given two things that could have had the potential to destroy both my relationship with food and my body image forever: prednisolone and the instruction to weigh myself every morning.

To put the situation into context, the most obvious symptom that sent me to the emergency room, and in turn saw me diagnosed with lupus, was that I had gained a lot of fluid weight. And while weighing myself was incredibly necessary to keep track of whether diuretics were working to rid my body of the excess fluid, stepping on a scale every morning was destructive for my mental health and body image.

My body flushed out the fluid within about a week, but to ensure that the medication I was prescribed took effect and my kidneys were starting to recover, I had to continue to weigh myself.

About a month and a half after my diagnosis, the prednisolone kicked in a whole new way. My face was suddenly more round than I ever imagined it could be and, I just couldn’t help myself – I craved food like never before.

There was a pivotal point where I realized how damaging a number on a scale could be. Getting up in the morning, I would see that little number on the scale screen and even though I knew fluctuation was absolutely normal, I found myself irrationally fixated on even the smallest of weight gain.

But I was incredibly lucky. I stopped myself and acknowledged when it had started to become an unhealthy habit. Looking back, I’m so grateful for that moment, as I can’t imagine the damage that mindset could’ve done over the months that followed.

On high doses of corticosteroids, my situation got worse before it got better. Overeating meant my clothes didn’t quite fit right, and for months, I struggled with my face shape alone. I shudder to think about how much damage I could’ve caused if I hadn’t had the restraint to stop weighing myself.

Just like that, 20 years of support, good habits and positive self-image could have been rendered useless at the hands of medication and a simple machine. I never would have guessed that something so crucial to my physical recovery could turn out to be so detrimental to my mental health and body image.

If you’re out there and this hits too close to home, please know you’re not alone; many of us have been there and some of us are likely to have to be there again in the future. I know how badly it sucks to have your medication wreak havoc on your body, but we stand united and defiant in this battle against lupus, and you’re beautiful. Don’t you ever believe any differently! 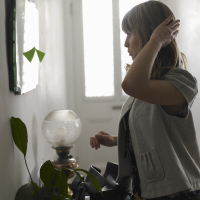