Why Being Direct Helps Me as a Person With Autism

Whenever someone has to talk to me and I hear the term “you’re not in trouble,” I’ve come to not trust it. On occasion, it’ll be something great like praise for extra effort/going above and beyond with an assigned job or an explanation to clear up a misunderstanding, but most of the time it hasn’t been a good thing. It’s condescending and painful, because I get told what I’m doing wrong even though sometimes I don’t notice it’s wrong at first, or I’ve been told multiple times that it’s wrong. Not to mention the other scenario where I feel like I’m never allowed to get away with anything while someone else gets off scot-free.

As a person with autism, I’ve grown up hearing that lie so many times, it’s ridiculous. Even in middle school, my eighth grade special ed teacher pulled me aside and sugarcoated the fact I was journaling in class. Cut me a break, I needed some way to let out what I was feeling – yet I was told it’s wrong. To this day, I can still remember her telling me I wasn’t in trouble.

Most recently, I was being a pain in the butt to my friend during rehearsals of a show and one of the other cast members said the director needed to see me. I got downstairs and asked if I was in trouble. Yet again I was told, “No, you’re not in trouble.” I fell into that false sense of security that I was off the hook at first, but once the conversation began to go on the subject of me annoying my friend – I could tell right away that yep, I got busted. I knew I was in trouble.

Not being able to call someone out for using that on me hurts; they think they’re helping, but instead I end up distrusting them. Plus, saying that sends mixed messages to me and makes me question my future relationships with other authority figures. I’d prefer if I was told directly what I was doing wrong, instead of feeling like everyone has to walk on eggshells around me. I feel like I’m not being treated fairly when people sugarcoat what I’m in trouble for.

Next time someone tries to tell me I’m not “in trouble,” I hope they’re telling the truth. 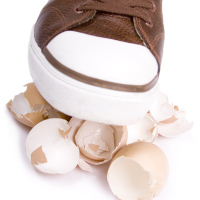