When Borderline Personality Disorder Makes It Hard to Identify Your Emotions

Although I am now in a very different place, I still have an odd relationship with my emotions. My borderline personality disorder (BPD) and complex post-traumatic stress disorder (C-PTSD) meant that I entered therapy with no language to name, describe or express my emotions. This took me by surprise because I had always considered myself as someone with a high level of emotional intelligence. I was the one my friends shared their problems with. I could always give a helpful and balanced insight, and provide emotional support. I was the “fixer,” the “mom,” the “therapist” in most of my friendships. I had a degree in psychology. I could read other people’s feelings and describe them back to them with a startling accuracy. So I assumed that, of course, I had a good grasp on my own emotions.

I had no idea how wrong I was.

When I started individual therapy, my therapist’s constant questioning of “What are you feeling?” drove me crazy. I couldn’t answer… because I didn’t know. Eventually my feelings started to take forms, but at first they had odd names, like “corkscrew feeling” and “fizzy feeling” and “run away feeling.” It was difficult to reconcile with this version of myself that was unable to use my usual very articulate verbal skills to describe what was happening inside. Now I am much better at it, but I still don’t always know what I’m feeling.

I did a piece of free writing, as a part of a workshop, which I would like to share. It is about how it feels to be a fully grown “high-functioning,” articulate and intelligent adult who is unable to name and/or describe her own emotions.

Here’s what I wrote:

I struggle to name them, or even describe them. But they kick me in the diaphragm like toddlers throwing tantrums. So violent their assault is that I can act long before I think; just to make them stop. Before I even know what they are trying to tell me.

I’m told that my face and body show what I am feeling, clear as day, but when asked to say what’s happening inside me, I say, “I don’t know, I don’t know.” And I don’t. It all just feels like emptiness, not so much nothing as a gaping hole — an agonizing lack of anything, an all consuming vacuum.

Emotions are huge. And I’m learning to know them, to listen to them and treat them. To describe, share and resolve, rather than shut down. But it’s a process. A hard one, a painful one, confusing and frightening. And sometimes the battle feels endless and sometimes I lose all hope of ever finding my way out of this maze. I lose a lot of battles, but I keep fighting. I trust the people who promise in their wisdom that I can win the war if I just keep on fighting. If I just keep swimming, they tell me I’ll get there.

And change happens, almost against my will. It’s terrifying and unsettling. I spend a lot of time frozen in fear. Or numb because it feels too big and I need to rest. But as I go on “anger,” “fear,” “sadness,” “shame” and “guilt” become characters. And I see them now — almost viscerally. I can hear them. Sometimes they whisper, sometimes they scream. Sometimes I’m thrown from one to another by their storm and I’m afraid to feel them because they are so heavy. But as they become clearer and I know their names and shapes, I begin to believe one day I’ll control them, as now I’m scared to feel them because of their power to control me.

So when I say I feel nothing, with tears rolling down my face, be patient. Know I’m not lying. I’m learning. 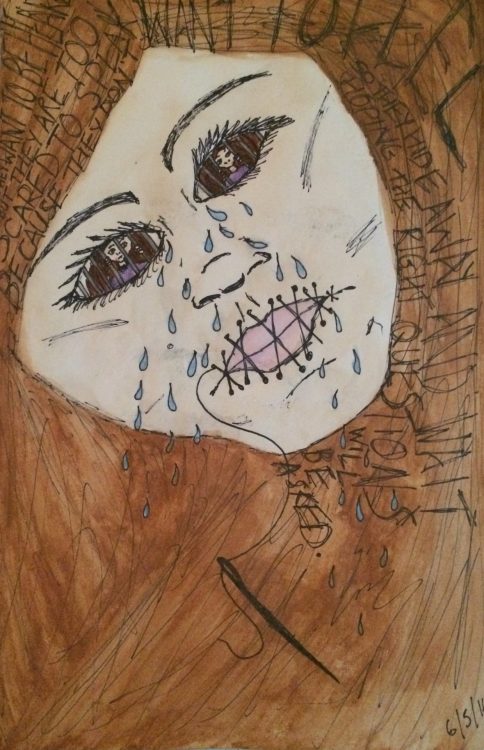