Every hour on this planet, another child is born with cerebral palsy.

Every hour, another individual enters our world with challenges and potential, awaiting a torrent of future successes, sadnesses, obstacles, and joys that will unspool over the years.

I tell my son Thomas, a glorious 20-year-old full of ambition, cleverness, and snark, a boy who has good looks, sandy hair, and blue eyes, and who rolls in a power wheelchair and speaks through an app on his iPad, that despite some challenges, his life will be much like any other. When I say that, he looks at me with a wicked sly half-grin.

When I tell him “It’s OK. You keep trying. It’s OK to fail… especially because you succeed so often,” he says to me, “Dad, disability is hard.”

My son is optimistic and full of belief in himself. But not always so optimistic that the world will understand that belief.

It is World CP Day. But why in the world is it still so complicated?

As a parent, I ask myself that question every day. What can I do to be there for my child? To help him achieve all that he wants… to become – gulp! – independent.

As the head of the Cerebral Palsy Foundation, I ask myself the same question, albeit a bit differently: What are the things standing in the way? How can we push the world a bit so that we lower some barriers? How can we make professionals more informed, and the world more understanding, so people can get past obstacles when they only lower so far?

Here are three things which might make that happen. All of which, not coincidentally, happened to be included in the Cerebral Palsy Foundation’s (CPF) new app. The CP Channel.

First, there is not enough information in our world. Parents who are already challenged by physical and caretaking demands that come along with a new child – let alone one with a disability — rarely have the time to look through this fragmented world of disabilities to find all the information they require.

And so the first of the CP Channel’s three video feeds is titled Insights from Experts. It features over 50 videos from the world’s most well-known experts. The videos range from understanding the brain to considerations about surgery to therapeutic approaches to adolescent behavior. To date, these videos have been seen by nearly one million people. Imagine: parents and people with CP can not only tap into the vast and thoughtful knowledge of our field’s best minds – they can also share it with their pediatricians, general practitioners and teachers.

This may not be a popular thing to acknowledge, but people are uncomfortable when they are unfamiliar. People with CP and other disabilities have been held back by this unfortunate reality for too long. Despite some advances we are seeing – despite the breakthrough ABC sitcom “Speechless,” created by Scott Silveri with a wild comic irreverence that allows us a new door in to understanding this world’s complexity, despite the theatrical strides being taken by the astoundingly thoughtful Broadway director Sam Gold, whose recent production of “The Glass Menagerie” broke new ground not only in understanding disability, but in understanding the heart of the conflict within the play – we need more exposure.

And so CPF Channel’s second set of videos share Videos We Love: a rotating collection of videos meant to share stories and perspectives from some of the CP world’s most well-known individuals. You’ll find Zach Anner and the Rainbow Bagel, a seven-minute film highlighting the challenges of getting around NYC in a wheelchair. There are videos from CPF ambassadors, including Maysoon Zayid’s fabulous TED talk, Micah Fowler’s thoughts about “Speechless,” many of our Just Say Hi spots and the evolution of that campaign: a lovely video with the amazing jazz musician Wynton Marsalis and – well – Tom Ellenson.

Together, these videos have been seen over 60 million times. They make many powerful statements. But as a collection, the statement is even bigger: life is challenging, yes, but life is fun, life is interesting, life is meaningful, and life with disabilities is a life to which we can all relate.

It’s that simple. Except it’s not.

In the everyday world, one person may be shy and so be a bit slow talking to others. In the world of disabilities, that slowness may come from the need for a speech device, and compounded by difficulty with motor movement.

In the everyday world, one might feel awkward in a restaurant because they don’t like crowds. But in the world of disabilities, it’s often difficult to get to your table without people moving to let you through.

There is a very realistic need for supports. And there is a great and urgent need for the world to better understand this.

That’s why the –> is focused on the here and now. In medicine and science, we so often look for cures – but so much can be done today if we focus on getting information out there.

The third thing to consider when trying to change the world is to have a mission with a real chance of accomplishing it. CPF’s mission is to develop and collaborate on initiatives which change lives for people with CP and related disabilities – today. We focus on solvable issues, and do so within existing institutions and organizations. We collaborate with a diverse range of medical institutions such as Harvard’s Children’s Hospital, Johns Hopkins/Kennedy Krieger, Columbia, and UCLA – as well as many partners who help create new ideas and innovations – such as Apple, Microsoft, and the NYC Department of Education. CPF is also the Official Partner and Technical Consultant of the hit ABC sitcom, “Speechless.”

These initiatives are important. They move things forward. So our final video feed features Our Work. These videos showcase groundbreaking initiatives, like Early Detection and Intervention (EDI), which is taking place within existing NICUs to dramatically lower the age at which developmental disability can be detected and addressed. Our Just Say Hi in the Schools program is creating breakthrough opportunities for inclusions in every school district in New York City, and now being launched in other schools nationwide. Our Women’s Health Initiative is addressing the substandard healthcare received by too many women with disabilities. And we have gorgeous initiatives like Design 4 Disability, where students create accessible clothing under the mentorship of fashion icons like Thom Browne or Derek Lam.

These initiatives are important not simply because they are creating change – they are creating templates for change. New ways of thinking that we can share, support, and implement. And materials that can be distributed to help make it happen.

We hope you like it. Happy World CP Day. And we’d love to hear your feedback.

PS: My son Tom is an actor. He says he loves to be on stage because it is the one place people stare at him for the right reasons. He has written a one-man show, “It Is What It Is,” which he will be performing on Off-Off-Broadway in New York City for five nights this October, because he says if he doesn’t create his own play, people might not think to cast him in theirs. To get tickets, go –>. 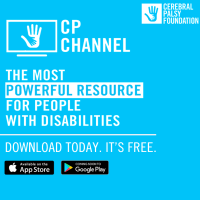