'Dancing With the Stars' Shines Light on Disability

Zein Al Maha Oweis is a RespectAbility Fellow who is visually impaired.

Earlier this month, Season 25 of “Dancing with the Stars” (DWTS) premiered, bringing 13 new cast members and their pros into the spotlight.

Not only has DWTS been praised for its high viewing rates, but the show is part of a group of reality television shows leading the way in busting stigmas on disability.

Known for being one of ABC’s top-notch reality TV shows since 2005, it has won countless awards such as Emmy Awards and nominations for Outstanding Reality Competition Program, Outstanding Choreography and Outstanding Host on a Reality Television Program.

This season tops previous ones with the largest number of cast members with known disabilities. Paralympian Victoria Arlen was diagnosed with transverse myelitis and acute disseminated encephalomyelitis as a teen rendering her speechless and motionless for four years. She used a wheelchair for ten years. She began to gain feeling in her body and began to walk again a year ago. She is famous for winning silver and gold medals in the London 2012 Paralympics.

Gliding alongside her on the dance floor is Debbie Gibson, a legendary 80’s pop icon who was diagnosed with Lyme disease in 2013. Gibson spoke up in public about how it affected her health and cognitive skills.

Shark Tank investor Barbara Corcoran also spoke openly about her dyslexia. “It made me more creative, more social and more competitive,” Corcoran said in an interview with Entrepreneur. “There’s a great freedom to being dyslexic… if you can avoid labeling yourself as a loser in a school system that measures people by As and Bs.”

Violinist Lindsey Sterling has spoken publicly about her struggle with anorexia, which she said got out of control when she started counting calories during her freshman year of college.

Throughout the decades, DWTS has shined a light on cast members with disabilities as the show grew in viewer ratings and popularity. These contestants ranged from different backgrounds, races, genders and disabilities, such as Nyle DiMarco, a Deaf model who won the Mirrorball Trophy in Season 22 with partner Peta Murgatroyd, making headlines after winning America’s Top Model.

Double-amputee Paralympic Amy Purdy, who lost her legs to meningitis at the age of 19, wowed the judges and audience members when partnered with five-time returning champion Derek Hough in Season 18.

Honoring men and women who served, DWTS featured veterans J.R. Martinez in Season 13 and Noah Galloway in Season 20. Martinez, who sustained third degree burns on 37 percent of his body in 2003, won the Mirrorball Trophy with his partner Karina Smirnoff.

Gliding into the hearts of millions, Galloway, who was injured in an explosion in Iraq in 2005, losing his left arm above the elbow and left leg above the knee, competed with partner Sharna Burgess all the way to the finale, winning third place.

In the first two weeks of the current season, cast members showed their best dance moves in both Ballroom and Latin styles, winning scores across the boards. On the second week of the competition two couples were eliminated: Barbara Corcoran (Keo Motsepe) and Debbie Gibson (Alan Bersten). Eleven couples remain.

Share
or  Copy Link
Link copied to clipboard.
Be first
29 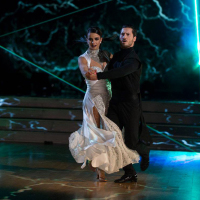