When I Realized My Depression Was Seasonal

It took me several years to realize how much sunlight and the seasons affect my mental health. My first episode of major depression began in late fall and eased in early spring, but at the time, that had no significance. I only saw the situational stressors that caused me to become overwhelmed. Increasing pain in my back and hips had caused me to stop dancing, which was my passion, stress release and creative outlet at the time. The frustration of being held back by pain was compounded by vague diagnoses and unsuccessful treatments. After a while of this, I was forced to confront the fact that the pain was not going away and I wouldn’t be able to dance anytime soon.

I would later realize that it was more so the combination of this difficult situation and the increasingly darker days that brought on my first episode of major depression. After a few years, I noticed that it was always the same time — around the middle of October — when my mood and energy levels would start to significantly decrease. Then, just as predictably, in early February, everything would start to feel easier again.

It became clear that the seasons had as much of an influence on my mental stability as situational stressors. Seeing this pattern was enlightening because I finally felt like I understood the monster I was dealing with. There was a reason everything felt heavier and harder in the winter. There was a promise of release when spring came. However, I also realized that I likely couldn’t slay this monster for good — seasons tend to come back around.

Since a lack of exposure to sunlight is the main cause of seasonal affective disorder (SAD), a common recommendation is to either go somewhere closer to the equator or do your best to manage the symptoms each winter. Since I don’t have the resources to live the snowbird lifestyle, I do what I can in the cloudy little valley in Western Canada where I live. Last year, in order to deal with my apprehension of the coming dark season, I decided to do all I could to prepare for it. I figured that if I followed every recommendation from my doctor and counselor, I would dance through winter the way I do summer. This was not a realistic expectation, however. “Managing symptoms” is distinctly different from making them go away entirely.

Although my body and mind needed extra rest and kindness, I was doing the only thing I knew how to do: plan more thoroughly and work harder. Ironically, the frustration of not having enough energy to do all the things I needed/wanted to do only made my mood lower and my anxiety higher. I pushed myself through October and November, keeping my head down at my part-time job and then retreating home to cancel on whatever activity I’d planned when the sun was up and I still had some energy. But about a week into December, even my stubbornness couldn’t help me to focus on my work and I ended up staring at my computer screen the way a university student does after cramming all night; when their mind refuses to process information anymore.

This was about four hours into a six hour shift. I went to the single washroom at work and finally allowed myself to cry, not tears of sadness, but of anger and frustration at my body for holding me back. I was angry that, despite my best efforts, I couldn’t fulfill my duties and be productive and creative. I was also angry that taking my meds, vitamin D, basking in a SAD lamp’s light and eating healthy were not allowing me to do everything I wanted to do. These things allowed me to keep my head above water, but I wanted perfect health and productivity. My inability to keep up was another failure to add to the list of my perceived shortcomings that the winter nights always bring to my attention. High expectations are a great motivator, but depression and anxiety do not respond well to force.

This experience helped me see that, while my work ethic and determination have paid off in other respects, they are actually counterproductive in the area of my mental health. This year, I will attempt to listen to my body and adjust my expectations as the season goes. I will still take every precaution, but I will respond to the darkness with kindness and self-care, rather than trying to fight my way back to the light. With every full rotation of the sun, I learn more about what I need to function and flourish.

Share
or  Copy Link
Link copied to clipboard.
Be first
175 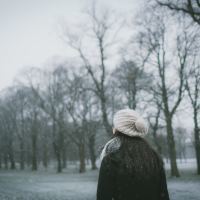