Sometimes the news isn’t as straightforward as it’s made to seem. Ellen Stumbo, The Mighty’s parenting editor, explains what to keep in mind if you see this topic or similar stories in your newsfeed. This is The Mighty Takeaway.

The picture of Franz Jakob laying on the floor while giving a haircut to 6-year-old Wyatt Lafreniere, who is on the autism spectrum, has gone viral. You’ve probably seen several news outlets covering the story as a “feel good” story.

As the parent of two children with disabilities, I am thankful for the people who are willing to adapt for my children, rather than expecting my kids to adapt to them.

But there is a problem in how we are framing these stories. From where I stand, it appears everyone believes Jakob, the barber from Rouyn-Noranda, Quebec, is an extraordinary person for extending kindness to a child with a disability. He is touted as a hero for doing his job in a way that worked for Wyatt.

Yes, not every barber might be willing to get on the floor to cut a child’s hair, but Jakob did. I suspect Jakob is a kind person, and he would have done this for any child, not just for a child with a disability.

As a matter of fact, I suspect if he had been on the floor with a “typical” child, the story would not have made the news. And that is really the point, isn’t it? It is only news because the child is autistic, and we still live in a world that sees disability as undesirable, “less than,” and where only “extraordinary people” are able to show kindness. A world where people with disabilities are used as inspiration for others and as feel good stories. It is the able-bodied person rescuing the disabled person, rather than one human being being kind to another (fully) human being. People with disabilities are rarely given full humanity and respected as such, especially in the media.

The issue is not that Jakob is exceptional. The problem is there are a lot of people who do not consider people with disabilities as valuable human beings who deserve dignity and respect.

I also suspect Jakob did not think twice when he got on the floor; he runs a business and he was getting paid to cut the child’s hair. He did it in a way that worked for his client, and that is a sign of a well-run, professional business with a philosophy of doing whatever it takes to serve their patrons well. I do wish more businesses were as accommodating as Jakob’s, I really do, because sometimes our kids are turned away from services.

I would want Jakob to cut my child’s hair if I had a child who needed someone willing to work with their sensory issues. Of course I would. But  I would not think of him as a “special kind of person,” but rather as a creative and talented barber.

At my local Chick-Fil-A one of the cashiers speaks Spanish. When he serves Spanish-speaking customers, he speaks to them in Spanish. You don’t see his story go viral. The difference? In the first story, someone was being nice to a person with a disability who communicated with sign. People with disabilities are often used as inspiration for able-bodied readers. Their humanity is lost in the narratives.

So when you see these types of stories shared in the news, think of this:

1. Is the disabled person’s name mentioned and is that person humanized? Often, these stories focus on the “amazing” able-bodied people doing nice things for a person with a disability. Sometimes we get the name and age of the disabled person, but mainly we only know them as a diagnosis. That is dehumanizing.

2. Did the child or adult with a disability give consent for their picture and story to be publicly shared?

3. Is the story framed under the narrative of “the able-bodied hero rescuing the person with a disability?”

4. Would this be newsworthy if it happened between two able-bodied people?

I don’t want to spread the narrative that children with disabilities are hard to love and “bothersome” and only a few “special people” would be willing to step in and enter into their world.

Kids with disabilities are valuable and precious human beings. They are lovable, and entering into their world is not “extra work,” it’s simply life.

Editor’s note: If you are wondering how to help make haircuts easier for your child on the spectrum, here are a few suggestions from our Mighty community:

5 Ways to Help Children With Autism Have a Great Haircut 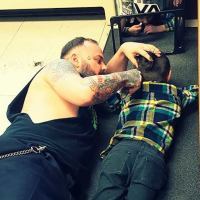