How Smoking Hurt My Mental Health

It has been about five years since I smoked my last cigarette.

Like many smokers, it began with a couple puffs here and there off somebody else’s cigarette at social gatherings while I was a student at a high-pressure university. My use of nicotine varied greatly — I could go weeks without a cigarette or have several over the course of an evening. For the most part, my use was dependent on my social calendar. I was not an addict… not yet.

The behavior was completely at odds with my past as a competitive runner and aspirations to work in the healthcare field. I was acting the rebel and I felt like a total bad ass doing so. It was kind of exhilarating.

The shift from casual smoking to all-out nicotine addiction occurred as I began to struggle with my mental health. The behavior progressed as my mental state worsened. It became a coping skill — something to do with my hands and something other than food to put in my mouth. I mistakenly believed it helped me cope with my symptoms. I refused to accept the chemicals could be both a stimulant and a depressant depending on mood and whichever effect I needed most in the moment.

The impact on my health from inhaling toxic carcinogens was the last thing I cared about at that point in my life, hell, I wasn’t even sure I wanted to be alive! Confounding my ambivalence towards health and life, many of my new friends, other young people struggling with similar issues also smoked. Peer pressure, even that of a covert nature has an influence. It’s hard to stop when everyone around you engages in similarly dangerous behavior.

About 25 percent of adults in the U.S. struggling with mental illness or substance abuse issues consume almost 40 percent of all cigarettes smoked by adults in this country. That is a significant, if not staggering statistic.

As is typical of a lot of smokers, I did try to quit several times over the course of the 10 years I smoked — using gums, patches, lozenges and even prescription medications, one of which induced suicidal feelings, a black box warning my doctor failed to mention.

I had periods of success with these methods, but it wasn’t until I committed myself to life that my status as a “nonsmoker” stuck. It is a myth that quitting interferes with recovery and is too “stressful” for people struggling with mental illness. It can be done are there are many tools that can assist with the process. Unfortunately, success is difficult in the absence of a vow to health and life.

There are times when I crave a cigarette and like any addictive substance, urges to use can be triggered by seemingly inconsequential events. But, then I remember that commitment I made to life and how smoking is counter to that mission.

Share
or  Copy Link
Link copied to clipboard.
Be first
35 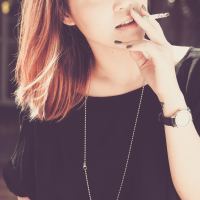