I bought into the whole, “invisible illness/disability” thing until my condition became visible, but even less recognizable. Outside the clinical environment, few people guess that I am wearing a mask because I recently had a transplant. More common assumptions are that I have allergies, I’m training to exercise at higher elevations, or I am simply making a fashion statement.

We make all sorts of incorrect assumptions when we recognize the presence of a disability. Offer our arm to someone using a white cane. Shout or mouth words to a deaf person. Keep students with wheelchairs in special education classes. When I wore supplemental oxygen in public because of my pulmonary hypertension, strangers would sometimes offer me their seat on the bus, but other times they’d ask me for a cigarette; the level of understanding was inconsistent. I’m unable to think of a so-called visible disability universally understood by the public.

When I think about the times I was bullied as a kid, I tend to think of instances when I was teased for the ways pulmonary hypertension made my physical appearance different from the norm. I’d let comments from my peers slide off, chalking them up to youthful insecurity, or ending the conversation by using big words like “intravenous” and “vasodilator,” the other kids nodding wide-eyed, pretending to understand. But adults teased me too — for wearing a helmet ice skating while on high doses of blood-thinning medications, for carrying so many bags (a backpack for my IV pump, another for my school books, and a bag for backup medication), and for the rash they assumed was poison oak, but was a side-effect of a medication.

As an adult, I’m still getting teased for doing what’s necessary for me to stay healthy. Last year, I wore a black face mask every day during the month of October. People stopped me on the street to guess my costume. I wasn’t posing as Hannibal Lecter, Batman’s Bane, or Darth Vader, though passing strangers delighted in rasping, “I am your father.” I wasn’t trying to look like a ninja or a Mortal Kombat character either. Three months post-heart-lung transplant, I had no interest in drawing attention to myself.

Having undergone a life-altering procedure that would remodel my ribcage for several months, I already felt like I didn’t belong in my own body. Now I didn’t belong in the neighborhood I called home. I live in the vibrant Castro district in San Francisco; locals and visitors alike don all sorts of costumes without ever getting a double-take. One man hangs around with nothing but a gold sock covering his genitals, often enough for my Lyft drivers to shrug and say, “Oh, yeah. That guy.” And yet, I had someone shout, “Boo!” at me, a barista roll her eyes telling me a cup of coffee would be “hard to drink with that mask on,” and a homeless woman point toward the Wells Fargo suggesting I would “feel better if you go up there and rob them.”

Though my sister and I laugh about the time a man stumbled when he passed me on a hike, and the time another man tripped down a few stairs when he took a second look at me (Really, men are falling for me all over the place!), wearing a mask adds to my already robust social anxiety. Misconceptions make illness — invisible or otherwise — that much harder to battle.

But I’m not about to let presumptuous comments stop me from living my life fully and safely. And neither should anyone else. I’ve settled on five ways I manage reactions from strangers. My hope is these strategies will work for others who have visible components to their disability. If you have some tips of your own, I’d love to hear from you!

It makes you feel better and seem more approachable. People can tell from my eyes when I’m smiling behind a mask.

Have a short explanation for frequently asked questions so you aren’t caught off-gaurd when you get them. For instance, “I have a lung disease that makes me short of breath.”

3. Treat it as an educational opportunity.

If you’re getting stares or questions about your disability, chances are, the person asking has never seen anyone like you. If the goal is to make illness a less taboo subject, we have to be open to sharing with outsiders. This is a chance to raise awareness for your condition. I also like to think that by taking the time to educate someone, I’m saving the next girl in a mask from dirty looks.

4. Simplify your response for children.

Kids will ask the questions adults won’t, but you may need to revise your prepared response so they can understand. “I get sick easily,” works better than, “I had a heart-lung transplant and my immune system is suppressed so I won’t reject the donor organs.”

Interactions with strangers are worth taking notes on. Whether you blog about them later or share them at cocktail parties, you’ll have stories to tell. No matter how painful the experience, I can always find a friend with whom to laugh about that clueless jerk.

Now, if you’re the one staring, don’t feel bad. I know it’s not normal that I’m wearing a mask. But I do see you staring, so let’s discuss!

On the bus one morning, a little girl was staring and pointing at me, asking her nanny why I was wearing a mask. “I don’t know why she’s wearing it,” her nanny said. “You should ask.” The woman’s response allowed me to explain, smile, and spread awareness to everyone in earshot. “THIS is how you raise kids without fear of diversity!” I wrote on Facebook that afternoon. My mask comes with a good story, and I’d love to satisfy your curiosity. Though aspects of a condition are sometimes physically visible, there’s always something beneath the surface, or rather, behind the mask. 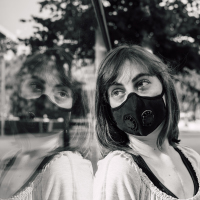