Why 'OCD Personality Tests' Are Harmful and Inaccurate

I recently came across a link shared on Facebook to one of those “fun” personality tests entitled “How Sensitive Is Your OCD Radar?” The test presents sets of three images and challenges you to choose which of the three images is different from the other two. Taking the test, I deduced that the more images you are able to distinguish, the more “OCD” you are. I was able to find the distinct image of all 11 sets, and thus got a score of “100 percent OCD,” though it frankly wasn’t that difficult to spot the outlying image in each set.

I happen to have struggled with obsessive-compulsive disorder (OCD) myself, yet I was not perturbed to the point of debilitation by the out-of-place images, contrary to the popular mainstream characterization of those with OCD as neurotic control freaks who must have everything flawlessly organized, even and squeaky-clean. This isn’t the first example I’ve seen of humor made off such perceptions of OCD; I’ve seen a handful of memes floating around Facebook perpetuating the same mantra, one that comes to mind being a meme about wishing your friend with OCD could come to your house and clean it. Hilarious.

Since discovering I had OCD in high school, I’ve come to take issue with this common perception of OCD, as I find it to be woefully incomplete. It’s not that such a perception is entirely inaccurate, but there’s much more to OCD than that. This is how OCD works: say you have a disturbing thought pop into your mind that some of your closest loved ones might actually be child molesters (that one comes from personal experience). You know, in your mind, it likely has no basis in fact, but you cannot make the thought go away, no matter how hard you try. Naturally, such an unsettling thought lingering in your mind can really mess with your head, and cause much anxiety, as well as feelings of helplessness at your inability to shake this thought.

This sums up the obsessions, or the “O” part of OCD, which is at the core. The commonly known traits such as hand-washing, cleaning and organizing encapsulate the “C” part: compulsions, which are carried out in response to obsessions in an often ill-fated effort to make them go away. This means those living with OCD who obsessively clean and organize are doing so because of obsessive, intrusive thoughts something bad would happen if they didn’t. Often, they are likely aware such thoughts are illogical, but that doesn’t stop such thoughts from lingering in their minds, and so they perform the compulsions anyway in an attempt to essentially shut them up.

So it’s much deeper than the prevailing characterization of OCD, which extends beyond Facebook memes and personality quizzes into fiction film and TV. The critically acclaimed 1997 film “As Good As It Gets” stars Jack Nicholson, in an Oscar-winning performance, as a misanthropic curmudgeon diagnosed with OCD who fits this trope like a glove: washing his hands repeatedly and thoroughly, locking doors/turning light switches multiple times, going out of his way not to step on cracks on sidewalks, bringing his own utensils to restaurants. Such a portrayal only touches the surface of OCD; it doesn’t get into the mind of Nicholson’s character and portray how agonizing he must feel performing these compulsions.

There’s also the detective series Monk, whose title character Adrian Monk, a brilliant ex-detective who had his badge stripped from him following a mental breakdown, has debilitating obsessive-compulsive disorder along with some 312 phobias. This portrayal does a better job giving the viewer an idea of Monk’s anxiety, but again is very stereotypical in its depiction of Monk’s compulsions, and largely touches only the surface of what OCD actually is, plus it occasionally uses Monk’s phobias and compulsions as comic relief.

Again, such portrayals are not necessarily inaccurate; they just fail to accurately paint the bigger picture. First of all, not all individuals with OCD perform such compulsions. My OCD was what they call “pure O,” meaning my experience was solely with the unsettling obsessions, and was never accompanied by compulsions. I was never neurotic about having everything spotless and flawlessly organized, which you would know if you’ve ever been in my room. The summation of my OCD was basically an intrusive, unsettling thought popping into my head, lingering beyond my ability to take my mind off it, and driving me to feelings of helplessness, hopelessness and despair.

For the individuals who do perform the compulsions, there is far more anxiety behind them than is often depicted in fictional portrayals. That’s why I’m bothered by the personality quizzes and Facebook memes I mentioned above. Because they are both incorrect in their perception of OCD and insensitive toward those who have it. OCD is a source of immense anxiety to those who have it, and personality quizzes are nonchalant toward that fact, and make a disorder that causes those struggling with it much despair to be nothing more than a joke and a “fun” topic for a “fun” personality quiz. Particularly inconsiderate are jokes like posting photos intended to “drive my OCD friends nuts,” as that implies you find it funny to intentionally trigger someone’s OCD and cause them debilitating anxiety.

I know what people are thinking: “Sam, it’s a joke. It’s all in good fun. Don’t be so sensitive.” There was a time when I might not have been so bothered by this, but my problem with these jokes isn’t merely that they are insensitive; it’s that they are incorrect. They perpetuate the inaccurate perception that having OCD means simply being neurotic about having everything flawlessly clean and neat, and not only ignore or downplay the anxiety behind it, but make it out to be a joke. I’ve decided I cannot sit back and allow such ignorant perceptions to continue to prevail. I do not care if it’s “just a joke.” I am not obligated to find it funny, nor does its status as a joke make it benign or incapable of causing harm.

When you say you “wish I had OCD, because then my house would always be clean,” you don’t know what you’re saying. I can assure you, despite never experiencing the compulsions, you do not want to have OCD; you do not what to be helplessly unable to shake unsettling thoughts. Moral of the story: educate yourself about what OCD actually is before making ignorant jokes or sharing ignorant “personality” quizzes.

Originally published on The Odyssey Online. 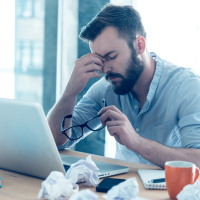