Why Shame Was More Damaging to Me Than My Illness

When it comes to my health, the emotion that always surprises me and throws me off guard is shame. There’s a lot of shame others put on us when we’re not in peak health, but there’s even more shame we may put on ourselves. For instance, you can look at someone exercising or having the body and eating habits you want and spiral down a deep rabbit hole of internalized shame around why you don’t have those things and who you are because you don’t have them.

And this is something I never really realized was there. I mean, obviously people say mean and hurtful things that can trigger our insecurities. But honestly, the shame many of us put on ourselves (and a lot of times don’t verbalize) can be even more damaging.

I remember a specific time where I was sleeping over at my friend’s house and I had my medication in my travel bag. When I opened them (all three at the time), I counted out each one and lined up all seven pills. Then I carefully took one at a time with some water and began to reach for my toothbrush when my friend said, “Wow, that’s a lot of pills you’re taking, Rachael.” Isn’t that nice? But what was worse than her comment was how I felt later that night as I was trying to sleep. I couldn’t stop the emotional spiral around feeling just completely awful about taking all this medication and why I had to take it in the first place. It was almost like I was failing at living or something and I felt really afraid to talk about my fatigue and pain. It took me five years after that experience and a lot of forgiving of myself (and her) before I slept over at another person’s house. And it was because of the shame I felt around my chronic condition.

Because when I was in the thick of chronic pain and fatigue I put a lot of shame on myself for needing to go to the doctor so often. For needing to take medication. For having surgeries again and again from injuries. For not being perfect, basically. Anyone else feel this way? My shame I felt around what was happening in my life made it so much worse. And I felt really defeated by it.

It took about seven years of me being upset and angry before I wanted to be released from it and was open to talking to someone. Because I realized (after hundreds of self-help books) that I was neck deep in shame and it was toxic to my health. In fact, it was a part of what was keeping me trapped and stuck from moving forward as I tried to get better.

So for those who feel ashamed about what they’re feeling, ask yourself if you feel ready to talk with someone who could help you feel better. Now you may read this and think I’m silly or wrong or that I’m a special case. And if that’s how you feel, that’s completely OK.

But, if you are in that place where you are searching for that person to talk to, then I would encourage you to keep looking. Tell your friends or a support group that you are looking for someone to help you and that person will appear in your life. As Brene Brown says, “If we share our story with someone who responds with empathy and understanding, shame can’t survive.”

Keep searching for that thing that will help you heal.

Photo via bruniewska on Getty Images. 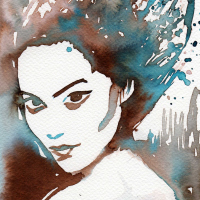