Why I Decided to 'Unplug' My Kids

My oldest child was 2 years old the first time he got to play on my iPhone. He went through several different tablets (the Sprout Cubby was our favorite!) and eventually we bought him his own iPad. My youngest child has had the same access to electronics since she was 2, but we made the switch to an iPad quicker with her. Our argument was that they needed to stop using my Apple devices, and just look at all those educational apps! We weren’t wrong regarding the apps. My son learned math, science and literature through apps, while my daughter (who has sensory processing disorder and possible autism) has learned social skills, better communication skills and coping skills.

In addition to being a young mommy, I am also a graduate student. Both children have disabilities and require a lot of attention. As you can imagine, quiet moments to complete homework are few and far between. An iPad is the perfect babysitter — I can sit my kids down on the couch, and get some real quality time for homework. But as they grew older, they became more dependent on their electronics. They begged for access to their iPads when we were in the car, during family time and while we were having our evening meditation sessions. I finally decided to take away the iPads the day that my son, 7 years old, screamed he could not live without his iPad, as the battery died in the car. I finally realized his obsession with his iPad was not healthy; we needed to make a change.

Unplugging my children, so to speak, has made a profound difference in their lives. Instead of staring at a screen and shouting at every game lost or cheering at every level won, my son with ADHD spends his time building unique structures with our favorite magnetic blocks, expressing himself creatively using our art supplies and spending extra time with the family. My daughter spends more time with me, expressing herself through music and dance and playing with her toys. They are both learning patience, instead of craving that instant gratification that comes with video games and apps. We still allow TV, but it is very limited as far as time and what we allow (we’ve been watching Disney and VeggieTales). None of this is to say there is not a place for iPads for kids — there are wonderful educational apps and programs out there —  but for my own children, it was time to pull the plug. 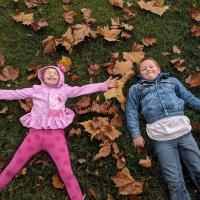