How I Achieved Wellness Despite Chronic Illness in 2017

I can’t believe it’s already the end of 2017! 2017 was a year of change and growth for me. It was the year I left the job I moved to this city for and started a career in a new, while adjacent, field.

2017 was also the year I started blogging. I originally started this blog to chronicle my journey to become a self-published author, and it was my goal to self-publish my novel, “Panic Cat,” by the end of 2017.

Alas, the best-laid plans of mice and men…

My illness ended up taking center stage in 2017, and I had to set my novel aside in order to prioritize focusing on my health.

But I still was able to utilize my blog well, though it ended up being more of a chronic illness blog than a writing blog. One of my very first posts on this blog, which ended up being my first post published on The Mighty at the beginning of 2017, was on my one-word resolution for 2017, which was “well.” While obviously no one is 100 percent successful at something all the time, the word “well” really framed my year.

I was able to focus on wellness, despite my chronic illnesses, and I was able to do so in a number of different ways that have not been top priorities other years. I believe the major reason I was so successful at them this year is because I was so focused on being well and making holistic, all around wellness a priority.

One of my top ways I made 2017 a year of wellness was by prioritizing self-care. I have a print hanging up above my dresser in my bedroom by one of my favorite artists and mental health activists, The Latest Kate (I talked about another of her prints here) that reads “Self-care is smart. Self-care will lead you to success.” Self-care, to me, has been the key to wellness in 2017, because it is linked to so many different things.

Self-care has not always meant things that are comfortable. It has also meant self-examination and self-advocacy. Wellness has meant prioritizing my health in 2017.

That kind of self-care is rarely fun. It means at least 10 minutes a day of taking pills and making sure I take the right ones at the right times, and at least one, if not multiple, visits, and often phone calls, to the pharmacy each month. It meant many doctor’s office visits, both to my primary and to specialists. Some brought answers and breakthroughs. Some were frustrating and felt like a waste of six hours of driving. It meant lots of tests, including 4 MRIs. And it meant learning to advocate for myself with medical, insurance, and billing professionals, something I’ve always hated doing but that proved necessary.

This kind of self-care has admittedly not been my most fun part of 2017. But this kind of self-care is also a huge step in the wellness direction, because it is not always something I have made a priority before 2017. Most of it was my own discomfort and anxiety about standing up for myself and being my own advocate. It also can all just get super overwhelming, and you wonder, especially when the symptoms are relatively managed, if it’s all worth it.

But with the word wellness as my guide, I wanted more than “relatively managed” this year, and am really proud of the strides I have taken for my own health, strides I am sure that will take me far into the new year.

I have also adopted other self-care habits that I have written about. One of the best, and most intentional, is my daily scripture habit. One of my forces in choosing the word well at the beginning of 2017 is the hymn “It Is Well With My Soul,” and my soul wouldn’t be nearly as well as it is without plugging daily into scripture. I usually do it to start my day, as my mornings don’t really feel started without it – it has become as essential as my cup of coffee! – but if I end up sleeping in (I leave for work very early!), I’ll do it after my first shift (I normally work a split shift during the school year).

Another big self-care wellness habit that is a work in progress, and enables me to do any self-care at all, is learning to shelve guilt. I wrote a post earlier this year on learning to give myself grace rather than guilt, and it is grace that continues to carry me through the year and into 2018. I am not perfect, but grace reminds me that I am worth taking care of. Guilt is a worthless emotion. It does not solve anything, and usually the things I am guilty about, like my illness, are things way beyond my control. Even when I do make mistakes, though, I am working on remedying the mistakes through action plans, rather than dwelling on them through guilt, and then not beating myself up over them. I am still worthy of self-care, even when I make inevitable human mistakes.

My resolution towards wellness in 2017 has also enabled me to spend much more quality time with my daughter and extended family. Part of being well is prioritizing the right things, and one of those biggest things is family. I have had so many special weekends spent with my daughter this year, and those were achieved despite my illness. We were able to do so many things that in 2016 I didn’t have the energy, health or spoon reserves for.

We got a zoo membership for my birthday in May and went to the zoo nearly every weekend over the summer. We went to multiple free events, including seeing sharks traveling from an aquarium that came to a local library. We traveled out of town to see family, often without my husband, trips that I never would have ventured on in 2016 with how volatile my health was. I was also able to attend several out of town weddings with my husband, events I had to skip the year prior.

What made all of this possible was self-care throughout the week, boundaries and knowing how to allot my spoons. Thanks to wellness, my illnesses are nowhere near cured, but they are a lot better managed. I will be likely taking a huge container full of pills for the rest of my life, but the idea of wellness has helped me come to terms of it. Being well is way more than just physical health, and 2017 has taught me that yes, I can certainly be well indeed, even though I am chronically ill.

When I made wellness my resolution, I never imagined that part of that journey would entail, except for a few very rare exceptions, giving up alcohol, likely permanently. When you choose a word, you never really know where it’s going to take you. I’ve been meaning to make a post about my personal decision to stop drinking, but haven’t gotten around to it. I definitely don’t judge anyone else’s choices to, but with my neurological conditions, especially my Chiari and migraines, I decided to try cutting it out, and it has made a big difference in my symptoms.

Something that is a work in progress, but that I have really made progress on in the last few weeks especially is accepting that I am, and always will be, sick, and that this is OK. This is related to guilt, but there is more to it: it’s an identity thing, which is why it’s going to take more than just this year to unravel. Accepting one’s self as a sick person, in some ways, feels like admitting failure: and from a Christian perspective, almost seems sacreligious, like you don’t believe in miraculous healing. While I do believe in miracles, I also believe, more likely, I have these chronic illnesses for life. But I do believe that just discovering this issue was a major wellness breakthrough, and accepting the fact that I’m sick as part of my identity will be something I work on more in 2018 (and be incorporated into the word I chose!).

I could not have achieved any level of wellness without a totally incredible support system. I live fairly far from a lot of my family and friends, and chronic illness sometimes makes me not the best on filling them in on my life, but they are so constant in their love and support. My husband drives me to appointments and has given up so many countless hours of sleep, working night shift and still taking on many extra demands. My daughter is empathetic and sweet much of the time when I am flaring or extra sick. My sister, who lives in Michigan, is the first person I tell when I am freaking out about something medical or have a new test result or a new appointment. She is, and always will be, my advocate and the one who taught me to be strong, along with my mom. My mom has handled many frantic phone calls from me and has given me sage advice and a listening ear, along with lots of motherly love. My mother in law has dropped everything so many times this year to drive three hours to help us out. I have friends who are like family who live states and countries away who encourage me to take time for and care for myself. I have support groups, church and caring coworkers. I have been thoroughly surrounded by my village this year, truly more than any other year.

In my next post, I’ll be talking about the word that I have chosen for 2018, but until then, I am proud of the progress towards wellness I made in 2017, and I look forward to continuing it into the new year and beyond. 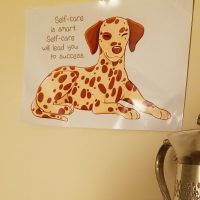