I’m generally not easily offended and I believe in free speech. But with that said, there are some rules that need to govern common human decency and how we treat children and young adults who are born with disabilities. Some comments are so hateful and disgusting they should never be made, especially on a public forum.

I suppose I’m lucky to have gone 20 years with no one ever making a rude or offensive comment about my child. My son is disabled and was born with a fatal degenerative brain disease. We lived in ignorant bliss till now and had not personally encountered anyone who could say something extremely hateful about a sick child — a boy who has fought unimaginable battles just to be alive. Then one day someone posted a comment on social media saying they “hoped my r*tard son would die.”

It doesn’t matter to me why this comment was made. I feel the need to speak out and urge people to think about what they’re saying before something is put out into the universe that can never be taken back.

Choose your words carefully because what you say affects more people than you realize. When you post hate speech publicly you can end up with many uninintened casualties.

Just because we live in a free country and are entitled to say, think and write pretty much whatever we want doesn’t mean doing so comes without consequences. When people use the r-word, they need to stop and think about how they would feel if this was being said about their own child, family member or someone they love.

All life is valuable and all people deserve respect regardless of what disabilities they’re born with. So think before you speak and choose your words carefully because those words may come back to you one day if you or someone you know has a child with disabilities. #spreadthewordtoendtheword 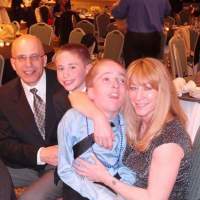