What Medical Students Need to Know About Ehlers-Danlos Syndrome

First of all, you probably won’t learn about Ehlers-Danlos syndrome (EDS) unless you’re a rheumatologist. You might hear about it in passing, it might be mentioned, or someone might tell you it’s fake – but that might be all you know about it. And I know that.

What you need to know is that I’m not trying to make your job harder. When I say getting off my crutches isn’t my goal, it’s not because I’m being difficult, it’s because my knees dislocate when the extra weight isn’t taken off of them. When I say I dislocated my shoulder reaching for something, I’m not exaggerating, it really happened and it does really hurt.

What you need to know is that I know I’m rare. As in, one in 10,000 rare, just for my subtype, which is the most common. That doesn’t mean I’m faking, or that I’m trying to get drugs, or that I’m a whiny teenager. I didn’t look in a medical dictionary and decide to fake this specific syndrome to get attention. I’m struggling, and I need your help to get better.

What you need to know is that you can’t separate me from my disabilities, which is why I had neon pink crutches and why I correct you when you use person-first language. I’ve been sick for longer than I can remember. There is no me without a disability. I got a traumatic brain injury when I was 1, and another when I was 2. I’ve had irritable bowel syndrome since I was 9. I’ve had fibromyalgia since I was 11. I was born with Ehlers-Danlos. And that’s just the physical things.

What you need to know is that you can’t learn everything from reading and going to school. You need to listen to me, because I know what it’s like to have this condition and you likely don’t. What you read in a textbook doesn’t all apply to me, because I’m an intersex person of color teenager with multiple other disabilities and illnesses. 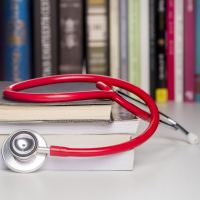