I Couldn't Attend the Women's March Because of My Disability, and That's OK

On January 20, rallies and marches were held across the world to mark one year since the 2017 Women’s March. Feminists organized to protest Trump’s racist, sexist and transphobic policies while shining a light on local issues. I’m a proud feminist and participated in feminist organizing throughout university. I have been to many marches, held many banners and I’m currently reading “Living a Feminist Life” by Sara Ahmed. It may come as a surprise that I did not attend the Women’s March on January 20. I didn’t attend because I’m a feminist with a disability, and for me this was the right decision.

Does skipping the Women’s March to sleep all day make me a Bad Feminist? This question and the guilt associated with not attending feminist events is something that crosses the minds of feminists with disabilities often. If we don’t go, does that mean we don’t care enough? Can we only show our solidarity in the form of being physically present? Are we being judged because we didn’t go? To my fellow feminists with disabilities — it’s OK if you didn’t go to the Women’s March.

No matter how accessible an event is, sometimes it’s just not in the cards for some feminists with disabilities. I wanted to attend but I used up the limited energy my disability allows for to get through my work week — there was none left for the Women’s March. If this sounds familiar or if your reasons for not attending are disability-related, let the guilt fade away.

There is nothing disability-friendly about cold weather, large crowds and noise. This is not to say we should cancel all marches; they are a wonderful way to build community and an effective tool for bringing attention to social justice issues. But there needs to be a more nuanced understanding of what participating in feminist movements looks like and it needs to go beyond taking attendance.

For events such as the Women’s March, there is a lot of pressure to attend as well as real and perceived shaming of those who do not. The assumption that feminists who do not attend simply don’t care is ableist and doesn’t take into account the experiences and needs of some feminists with disabilities. Showing up to an event is not the sole indicator that you’re a feminist and care about social justice issues. There are so many other ways to support movements, and feminists with disabilities are already doing this work in ways that don’t jeopardize our health and well-being. 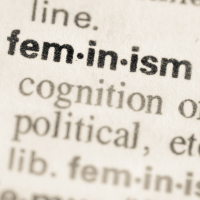