Editor’s Note: If you’ve experienced sexual abuse or assault, the following post could be potentially triggering. You can contact the National Sexual Assault Telephone Hotline at 1-800-656-4673.

On Wednesday, Larry Nassar, a former USA gymnastics doctor, was sentenced to 40 to 175 years in prison, after sexually assaulting more than 156 gymnasts and other athletes over the course of 25 years.

“Justice requires action and a voice, and that is what happened here in this court,” Judge Rosemarie Aquilina said, noting the bravery of those who shared their stories during the trial. “Sir, you do not deserve to walk outside of a prison ever again.”

After reading his sentence, Aquilina added:

Aquilina denied Nassar’s request, referring to the letter in court as “mumbo jumbo.”

You may find it harsh that you are here, listening, but nothing is as harsh as what your victims endured for thousands of hours at your hands collectively. You spent thousands of hours perpetrating criminal sexual conduct on minors. Spending four or five days listening to them is significantly minor considering the hours of pleasure you’ve had at their expense and ruining their lives. None of this should come as a surprise to you.

It took seven days to get through the victim-impact statements — 169 statements were presented, 156 read by survivors, themselves.

“We were ultimately strong enough to take you down,” survivor Kaylee Lorincz said on Wednesday. “Not one by one, but by an army of survivors. We are Jane Does no more.”

Prior to sentencing, Nassar pleaded guilty to 10 counts of criminal sexual conduct in Michigan and had been sentenced to 60 years in prison for federal child pornography charges. Aquilina’s sentencing applies to seven of the 10 charges. Sentencing for the remaining charges will be decided following Wednesday’s trial.

“Sexual abuse is so much more than a disturbing physical act,” Kyle Stephens, the first survivor to give a statement, said last week. “It changes the trajectory of a victim’s life, and that is something that nobody has the right to do.” 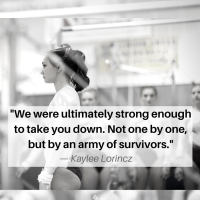