What You Should Know About Marissa, the Woman With Down Syndrome From the CNN LoveStory Video

There are a few things I would like you to know about my daughter, Marissa, who was featured in the viral CNN LoveStory Facebook video.

The video is one of a series of six to eight minute videos that highlight couples/people who overcome odds and diversity on the path to love. It’s a visually beautiful montage of video and photos of Marissa. But Marissa’s accomplishments were missing. She is portrayed as the “adoring” girlfriend, which she is, but she is so much more.

CNN filmed and interviewed Marissa and me for three days. They then heavily edited the footage. Any accomplishment of Marissa we shared during our interviews are blatantly missing from the final product, despite us both talking enthusiastically about them during filming.

What we want the world to know about Marissa that was not included in the video is:

She attended and graduated from the same two-year post secondary program, Wayfinders, highlighted in the video.

She graduated having earned awards and accolades from all staff.

She currently supports Wayfinders by giving presentations about her experience at Wayfinders and volunteering at community events to promote post secondary options for students with disabilities.

At the time of filming, she had just returned from a job on set of a feature length musical at Zeno Mountain Farms in Vermont. She was a valued crew member working alongside professionals behind the camera on “Boom Mic” and “Dolly” and in front of the camera as a featured ensemble dancer.

She attends Joey Travolta’s “Inclusion Films Practical Film and Media Workshop” and is learning to strengthen her behind the camera skills. The CNN film crew had intended on filming her at Inclusion Films but ran out of time. She rides public transportation independently five days a week for over an hour to attend.

The outdoor scene where Marissa and John see each other for the first time is at The Down Syndrome Connection of the Bay Area’s Step Up Walk. Marissa has been a valued employee for two years for the Down Syndrome Connection, working in community outreach and special events. She was working at the event that day helping Megan Bomgaars sell her t-shirts and taking photos. Marissa was at the event at 9 a.m. to help set up and preform her job duties.

Marissa also works for “Future Films Productions” and has provided her skill as a sound technician on many paid commercial projects.

My daughter, like so many women, was stereotyped into a role where her talents and strengths beyond being “a girlfriend” were not shown. I tell myself that’s OK, her beauty and confidence shined through. It showed people that adults with Down syndrome want to date and have the ability to be in a relationship.

But it could have, and should have, shown so much more highlights of who she is as a person, or at least giving equal time to her strengths and current life goals. She like most women, is more than an adoring girlfriend. 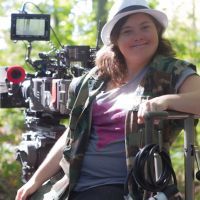