Though opioids offer pain relief for serious chronic pain conditions, those who misuse them may become addicted. This is because opioids interact with several “receptors” on cells, which can trigger “feel-good” effects in addition to pain relief. But in a new study, researchers say they have created a compound that only targets pain receptors — theoretically paving the way for a new class of opioid drugs without the risk of addiction or possibly other side effects.

In a study published in Cell earlier this month, researchers at the University of North Carolina along with other collaborators created a 3D image of the structure of a kappa opioid receptor — the cell receptor that affects pain — while activated by an opioid drug. Then, they used this information to create a drug-like compound that only activated kappa opioid receptors — not other cell receptors, like those that create a “feel-good” effect.

“We expect these results to translate into novel drugs with improved selectivity for [kappa-opioid receptors], as most current opioid medications (such as OxyContin or Vicodin) activate all three opioid receptors, which is the reason for some of their side effects,” Daniel Wacker, Ph.D., a research associate and one of the paper’s authors, told Inverse.

No actual drugs have been created or tested on humans based on this finding yet, so it’s not clear if drugs that only bind to kappa opioid receptors are more effective than opioid drugs that interact with other receptors, too. The study also acknowledges that kappa opioid receptors are connected to hallucinogenic and dysphoric (feeling discontent and anxious) activities, though the study’s findings about the receptor’s structure could help drug makers avoid these side effects.

While the results are being touted as a step forward in the fight against opioid addiction, any new “non-addictive” opioids created from this research could also affect chronic pain patients who are using their medication responsibly, which is the majority of opioid users as studies have found the percentage of people using opioids for chronic pain who become addicted is potentially between one and 12 percent. Many patients using opioids safely still experience the stigma of opioid use, and many are subject to drug tests or limited prescriptions due to efforts to fight the opioid crisis.

Erin McDermott, a Mighty contributor with chronic pain who has been told she will need to taper off her medication, told the Mighty she thought a non-addictive pain medication would be a win for everyone.

“Chronic pain patients don’t want to deal with the side effects of dependence either, the illness behind the chronic pain is more than enough,” she said. “Not to mention it [could] get rid of the database tracking, doctor shopping, pain contracts, and most importantly save lives.”

Daniel Permenter, a Mighty contributor with fibromyalgia, said a medication with no side effects seems “almost too good to be true” and could help many people, and he thought the progress made in pain management helps legitimize the pain he and others face.

“However, I feel that we should still be fighting the stigma of opioids with chronic pain sufferers as society still looks down on us as drug addicts,” he said.

Mighty contributor Joanna Dwyer, who has fibromyalgia, agreed that this new potential medication should continue to be explored and that any safe alternative to opioids should be accessible.

However, she was concerned that the underlying causes of addiction (and chronic pain) are still not being addressed, and wondered why so much research was going into building another synthetic instead of on alternative treatments like marijuana.

“Doctors and scientists need to spend more time and research on understanding addiction, chronic pain, depression, etc,” Dwyer said. “Instead of new Band-Aids, we need to find a cure. This pill is just treating a symptom instead of healing the disease.” 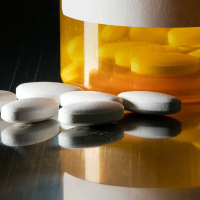