A rule change by the Trump administration will vastly reduce financial penalties on nursing homes found to put their residents in danger or cause them harm or death.

Previously, when nursing homes neglected or mistreated their residents, the homes faced substantial fines. The change in policy comes from a request by the nursing home industry, The New York Times reported.

Nearly 6,500 nursing homes have been found in violation since 2013. Two-thirds of those were fined by Medicare. Now, fines will be discouraged for errors that are considered a “one-time mistake,” even if the error had dire consequences.

Other fines issued by Medicare include penalties for specific violations as well as daily fines based on violation length — including how long it took for staff to be retrained to prevent a similar issue — and denying payments for new admissions.

Kate Goodrich, director of clinical standards and quality at the Centers for Medicare and Medicaid Services, said excessive regulation was getting in the way of providers caring for patients because they were too busy complying with the regulations.

Opponents of the rolled-back regulations say the weakened fines and penalties hurt an already fraught system.

“They’ve pretty much emasculated enforcement, which was already weak,” Toby Edelman, a senior attorney at the Center for Medicare Advocacy, told The New York Times.

Bruce Darling, a national organizer with ADAPT, told The Mighty:

“Reduced funding and access to community-based services will drive even more people into nursing facilities which, left unchecked, will be able to provide substandard assistance without worry of effective enforcement,” Darling said.

Medicaid is only required to cover the cost of nursing home facilities, despite nursing homes costing more than home- and community-based services. Some states provide waivers for people who would rather use community- or home-based care services — the vast majority of those with a disability.

“Although many people believe that institutional placement in a nursing facility is a last resort, for some disabled Americans it is the only option when they need assistance with long-term services and supports,” Darling said. “This is particularly true of people with the most significant disabilities who find that their needs ‘exceed the cap’ for community-based services. Such caps may be as low as a couple hours of assistance a day.”

Community- and home-based care services continue to face cuts at the state and federal level. Slashes to state budgets for in-home care attendants in several states threaten to add more people to nursing homes who need care on a daily basis.

In Missouri, Gov. Eric Greitens vetoed a heavily-supported bill, causing the threshold of eligibility or “cap” to receive in-home help from an attendant to rise — a move which could cost thousands of people with disabilities in Missouri to lose the help they need.

“Disabled and elderly Americans want the same things that other Americans have — basic freedom and an opportunity to have a life with all that means — the opportunity to have an education, job, home and family,” Darling said. “This is unavailable to folks who are locked away in institutions where they may not even receive adequate assistance with their most basic needs.”

Got a tip for our news team? Send it to [email protected].

Photos by sdigital and Michael Vadon 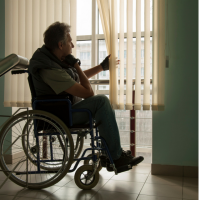