On Tuesday, disability advocates from ADAPT protested a committee hearing for H.R. 620 the ADA Education and Reform Act. The bill would make filing complaints under the Americans With Disabilities Act (ADA) a lengthier process for people with disabilities.

The bill will prohibit people with disabilities from taking immediate civil action when they are discriminated against due to “architectural barriers,” a form of discrimination recognized under ADA. Currently, taking civil action includes filing a complaint with the Department of Justice or filing a lawsuit under the ADA.

H.R. 620 would delay civil action by making the person with a disability provide a written notice to the owner of the business that includes the following:

“They have to go through a very burdensome process, notifying the business owner, jumping through all these other legal hurdles before they’re able to assert their legal rights to gain access,” Tyler Ray from the American Civil Liberties Union’s (ACLU) Washington legislative office, told The Mighty.

During Tuesday’s meeting, ADAPT activists chanted, “Don’t take our rights away, hands off the ADA.” A police officer is seen with zip-tie cuffs, and someone says that people are being arrested before the video ends.

We just watched a woman in a wheelchair be threatened with an additional charge of resisting arrest because she couldn’t operate her wheelchair with her hands restrained in zip ties.

Unclear if she’ll actually be charged.

The bill removes a key provision of the ADA by keeping people from going to court to enforce their civil rights, the ACLU wrote of H.R. 620. The bill could also prevent timely removal of accessibilities barriers and only calls for the business owner to make “substantial progress” on fixing the accessibility issue. “Without this critical enforcement mechanism, compliance under the ADA will suffer and people with disabilities will be denied the access to which they are entitled to under the law,” the ACLU noted.

Support from this bill comes from those who believe it will cut down on “frivolous lawsuits” filed by lawyers to take advantage of the ADA and non-compliant businesses. However, the ACLU said that this is a myth, and that the “true purpose of this bill is to allow businesses to delay meeting their obligations under the law – for weeks, months, or longer – at the expense of people with disabilities.”

People with disabilities have been protesting the bill since it was introduced last year, spawning hashtags including #OpposeHR620, #CripTheVote, and #HandsOffMyADA.

The worst thing about #HR620? It won’t stop fradulent lawsuits but will make LEGITIMATE equal access claims more difficult for #disabled people to file. BOTTOM LINE? If lawbreakers haven’t followed the ADA in 28 yrs, they won’t unless they’re forced to. #HandsOffMyADA #StopHR620

hi. please call your reps TODAY to ask them protect the civil rights of disabled people like myself by voting against #HR620 this week. we need nondisabled voices out there letting our reps know that equal access is a right we all deserve. #HandsOffMyADA pic.twitter.com/Kp4031ShmF

The worst thing about #HR620? It won't stop fradulent lawsuits but will make LEGITIMATE equal access claims more difficult for #disabled people to file. BOTTOM LINE? If lawbreakers haven't followed the ADA in 28 yrs, they won't unless they're forced to. #HandsOffMyADA #StopHR620

Imagine you can't #access the toilet because your boss blocks your way. Should you have to wait 6 months to see if he makes "reasonable progress" toward not harassing you? If not, #OpposeHR620. #Disabled people have the same right to public safety, dignity. #HandsOffMyADA

#ADA #HR620 #OpposeHR620 #CripTheVote
HR620 is the antithesis of a civil rights law. It fails to recognize that #disabled people are discriminated against at the very moment they are excluded from a business or entity. Access delayed is access denied.

Proponents of #HR620 are arguing that ignorance of the law (the ADA) means they shouldn't have to follow it. It's like a club saying "oh, I didn't know I needed to have more than one exit." The ADA is a law, just like a building code. Get on it. #HandsOffMyADA

“I am really concerned about this bill. I think it threatens persons with disabilities civil rights.” Thank you Rep Slaughter!m for your dedication [email protected] for disability rights. #HandsOffmyADA #ADAPTandRESIST pic.twitter.com/7xxxsX7tJh

Illinois Sen. Tammy Duckworth, who also has a disability, voiced her opposition to the bill in an op-ed for The Washington Post. She said that this legislation “would send a disgraceful message to Americans with disabilities that their civil rights are not worthy of strong enforcement.”

Duckworth actively tweets her opposition to the bill.

Even as advocates for Americans living w/disabilities protested & were arrested during the hearing tonight, the House Rules Committee just advanced a bill that would gut ADA protections for people with disabilities #StopHR620

After making it out of committee on Tuesday, the House voted to pass H.R. 620 on Thursday. The bill will still need support from the Senate.

Got a tip for our news team? Send it to [email protected].

Share
or  Copy Link
Link copied to clipboard.
Be first
436 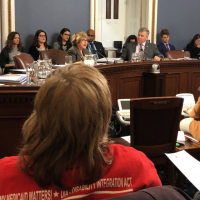