How My Autistic Son Dealt With a School Shooting

School shootings seem to be common place these days. It’s sad, tragic, devastating and every other word in the thesaurus. But this isn’t a story about that. This is about how one 13-year-old on the autism spectrum handled one at his own middle school.

I was with my husband on a Tuesday, taking him to have dental surgery. We left as soon as both children got on the bus to drive over an hour to get this procedure done. As we were pulling into our parking spot, my oldest son texted me, “Mom, what is happening?” His high school had been put on lock down. About that time, my phone starts blowing up with Facebook tags. The middle school was on lock down due to a shooting.

I was in panic mode. As a parent, my first thought was, “is my child safe.” As a parent with a child on the spectrum, it quickly turned into, “is he having a meltdown.” You know how it is, unknown situation, a major change to the normal day. All of those instances and scenarios that you have dealt with for years that can cause meltdowns. I tried texting him, but knew he is a rule follower and had probably left his phone in the locker.

I walked into the hospital with my husband, but I don’t remember it. I was on the phone with anyone who can get down there to pick up my baby. The ones who know how to help him if he is having trouble with his emotions. Of course, nobody can access their children. ATF, SWAT, sheriff, police, they are all there. I’m following it on the news in the waiting room.

An hour and a half after the text from my son, I was flying down the highway, glad my husband was still drugged up and not paying attention to the odometer. I got home in 45 minutes, dropped him off and headed to the school. It’d been five hours since the shooting; kids were still not being released. I relieve my sister, who was the one to pick up my oldest and waited for three hours for the middle school kids.

I was almost hyperventilating at this point. I waited in line as they allowed only 10 parents at a time to get their children. I wanted to tell the sheriff at the door that my child is autistic and I needed in. But I know every parent waiting was just as panicked. We finally got in. I got my son; my baby was safe. I hugged him for dear life and as we are walked back to the car I asked if he is OK, if he knew what is going on.

He looked at me with a big grin, it shocked me. I wondered if he may have thought it was a drill and didn’t realize the gravity of what had happened. He said, “Mom, I’m fine. I knew what was happening because I was in the clinic when the walkies started going off. I had a belly ache and went down there before class.” The clinic is by the main office, he could hear bits of what was coming over the radio. He knew why they were on lock down.

There was another boy with him, and that boy started to freak out. So my son, my socially awkward, hard to show feelings and empathy child, sat with this boy, locked in a clinic, in a non-typical moment, and worked with the boy to calm down. I was in shock. He was beebopping down the sidewalk with no care in the world. He helped someone and he handled his emotions well.

He knows what happened that day, knows more than most kids. He hasn’t shown any emotion about the situation. It doesn’t seem to have phased him. But despite that, he did understand what was happening, and he did identify the situation in front of him. He was able to empathize with the boy who was with him and offer help by instructing calming techniques he uses for himself.

The way he handled this awful event made me worry less about my boy’s future. He is capable of overcoming things and offering a helping hand when the need is there. 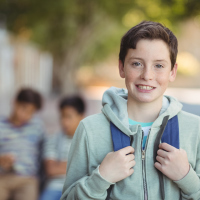