The OCD Symptom That Led to Disordered Eating

Before I get into explaining how all this came about, I would like to say that this specific symptom of OCD is not widely known. Many people don’t know that when a person with OCD restricts food, they are engaging in a compulsion (a.k.a the restriction in my case) to try and relieve feelings of anxiety and fear brought on by an obsession. However, the person is usually aware their mind is thinking irrationally and can see a problem in the way they are behaving. Whereas a person with an eating disorder may not know the harm they are doing to themselves.

This topic was very difficult to discuss with the online community and even my community as well. The reason being no one seems to take mental illnesses seriously. From personal experience, many people have just told me to, “snap out of it” or to “stop wallowing in your own misery and get over it.” So of course talking about my these subjects with the public can be frightening at first, especially when in conversation with a friend or family member. Nonetheless, I just want  people to know if they are struggling with OCD, they are not alone in their fight.

Anyways, as a kid I had always been very calorie-conscious, reading the labels on the backs of the packaged snacks my mom gave me back in the day. I had always known all those numbers mattered, that they were the difference between what people called, “thin” and, “fat.” I knew there were limits, and I established them. Then several years later I gained a few pounds in middle school — because I along with everyone my age was going through… puberty. In a desperate attempt to shed the weight, I developed a vigorous exercise routine and began dieting for a few weeks, but nothing seemed to work. That was when my weight/food obsessions began. But little did I know, I would be battling bigger menaces in years to come.

Flash-forward to when I was 16 and I was being bullied by two girls at my high school because of my OCD symptoms (I had a nervous habit of tapping my pen 20 times whenever I thought about one of my teachers hating me). At first, I restricted food to cope with the anxiety I felt about having to share the same environment with them for six hours a day. This was late February, two weeks before a legendary school dance I was attending. When March rolled around I tried on my dress and discovered it didn’t fit, so I put things into overdrive. I would skip meals, throwing my cereal into the trash when my dad wasn’t looking, not to mention walking the hallways during lunch in an effort to burn calories and to avoid the dreaded cafeteria.

Meanwhile, my friends would be chatting away without me. Unfortunately, I had to pay the price for obeying my demons: social isolation. But at the time, I didn’t care. I thought, “At least I am getting thin…” Outside those walls things only got worse.

I would pretend to be enthusiastic at dinner. I would gobble down my meal like the good girl I was, only to workout on the elliptical right after. I was determined to keep my calorie consumption low.

Although I was beginning to feel extremely dizzy and weak as the time progressed, my twisted mind kept telling me I was one step closer to “perfection.” All while my other half was screaming I was crazy for doing this to myself. The crazy thing about it was, I knew it was wrong but I couldn’t stop because I was consumed by my obsessions.

Each time I felt myself shrink, it encouraged myself to keep going — the power was just too good to let go of. Even though my clothes were baggy and I became more distant, my parents never really caught on. Part of me ached for them to know of my pain, but the latter begged for me to conceal the truth. Finally, I mustered the strength to open up to a teacher about my struggle. She then told the school nurses, who then told my mother. Her initial reaction was one of complete shock when she confronted me about it. I felt as though she was scolding me when she said, “It’s total bullshit.” Later on she told me it was her way of expressing how upset she was that I would endanger my own body and I didn’t need to change. She soon after apologized for all the things she has said in the past that sounded offensive or out of line. And truthfully, I am still struggling to this day, but I have learned that only I have control of my mind and that it is my choice whether I want to block out negativity or let it in. 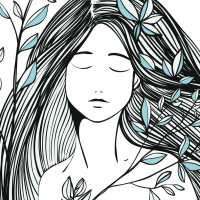