I have always been a complete bookworm – constantly caught up in worlds of fantasy and magic, every spare moment spent captivated by words and stories. However, when my health hit the floor, it took too many of my normal daily habits with it. Brain fog and waves of pain and fatigue made it almost impossible to sit and focus on a reading something, let alone spending hours of the day keeping my mind in one place. With my time being so limited, my other responsibilities took priority, and having any spare time to myself when I was feeling well became very rare. And certainly, I couldn’t just waste away hours of the night reading page after page just for the joy of it. I still would pick up a book now and then, but it was hard for me to find the magic that had once been there.

But, with my love for reading still in my heart, I headed off with a stack of saved-up vouchers and treated myself to a new stash of books, hoping to somehow find the time to enjoy them someday soon. And that day came along. After a long train journey between uni and home, I found myself unsatisfied by listening to music, too uncomfortable to sleep, and with a dead laptop battery, I was longing to have something to read. So, once I was home, I grabbed one of my new buys off my shelf and took it with me for the return journey.

And it was incredible. Rested from a burden-free weekend with hours to spare ahead of me, I tucked into a new adventure of fiction. Young adult dystopian fantasy has been my preferred genre, but I had read so much during the previous years, I was lacking in something juicy to sink my teeth into. As luck would have it, Veronica Roth, a favorite author of mine, had brought out a new book in the last year – “Carve the Mark.” So, I was glad to finally open it up. With the first few chapters being sufficiently enticing, I eagerly read on, keep to fall back into the wonder of a new world while I could, and I was sucked in so easily. After these few years, this was a thrill itself. But what caught me most, hitting me right in the heart more than the brewing romance of genius world building, was an attribute of the main character, Cyra.

Not to spoil it, but basically one of the key features of this world is that every adolescent develops some kind of supernatural ability (called a currentgift) caused by the Current (basically the energy that makes up the universe – similar to the Force in “Star Wars”). However, Cyra’s gift was special. These “shadows” of the Current filled her body and caused agonizing pain to anyone who touched her skin. But the thing that hit me was that the shadows also caused Cyra agonizing pain too. They were always there, under her skin, part of her body. Always shifting in places of her body or in intensity, sometimes brought on by stress or emotions, but always painful.

There were times where she was completely overwhelmed by agony so intense that I didn’t even know that words could explain it. It meant that she would sleep till late in the day, almost being able to find an escape for the pain in rest – although people seemed to judge her for it. It meant that whatever she did, every moment of every day, was done while still in agony – but having to hide her struggles from the rest of the world. It meant that even the simplest every day tasks took so much time and energy, just because of the pain. She could only wear certain clothes so she might feel comfortable. She missed out on things around her. She tried almost everything she could to ease it, everything that people suggested would help, but nothing worked. She struggled with the side effects of medication that were almost as bad as the pain itself, just so she could function and seem normal. She had to watch people around her see her in weak helplessness, overcome by agony and unable to help herself.

Somehow, Roth captured so much of the truth of life with chronic pain. Within a beautiful world of fantasy that I’ve always loved, I was able to connect in such an immense way with a character. I could see in words the struggles that I felt. I felt it alongside her. All the emotion and thoughts and struggles of life were written there in black and white. It brought me to tears.

So many years I had spent living these magical lives through the pages of books, but instead of mourning the fact I was trapped in a bubble of pain, unable to go on these adventures, I was able to find an adventure within my pain too. Cyra is not just someone that struggles – she is so much more than that. She is such a rich character, who’s life is not only shaped by her constant pain, but shaped by so much more than that too. She is not some pitiful weak and helpless damsel in distress, but a strong and powerful heroine who faces so much. She has flaws, but her flaws don’t come from physical weakness. She has strength, not just to face her pain but to do so much more – because she chooses to be strong.

Although I am still trapped here, and likely won’t be doing much adventuring anytime soon, reading Cyra’s story hit me more that I could explain. I was able to feel deeply and understand deeply the experience I was reading about. I was able to explore a whole magical world of fiction, just like I’d used too, but through the eyes of someone like me. Not only did I feel like I was a part of it, but Cyra’s story made me realize how grateful I am of my own. Of my own strength, of the support I have around me, where Cyra had none, of my own identity that exists outside of my illness. Reading this book, which is incredible for so many reasons, changed something in me. It has allowed me to feel understood by someone else. It has allowed me to claim my illness as a part of me but not as all of me. It has allowed me to embrace my pain, express it in words, understand it and accept it for what it is. It has allowed me to know that I am strong, I am capable.

I, too, can feel the shadows that surge across my body. I, too, cannot escape them and the agony they bring, and the life that they force me to live. But that doesn’t mean I fight, or maybe even change the world. 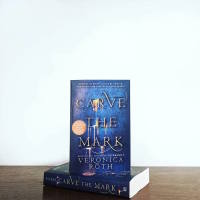