Last year, I saw an article in the Asbury Park Press about a student football player from my former high school receiving praise for taking a fellow student with Down syndrome to the senior prom. At first glance, I saw this as an act of generosity and heroism, but later I sat down to think about it more deeply after seeing a friend’s post about how this wasn’t an act that promoted inclusivity. Then I started to feel disappointed about the way this event was such a spectacle to the mainstream population. I realized this was anything but inclusion. The student football player simply treated his classmate like a normal human being, and it should not have been seen as charity work. To me, this spoke volumes about society’s view on people with disabilities: that somehow they are less than human beings.

As a woman with a disability myself, I felt ashamed that it took my friend’s post to make me realize the truth about the Asbury Park Press article. The friend who wrote that post is the same man who took me to my junior prom nearly six years ago. We had been friends long before the night of the prom, and he has never treated me differently because of my disability. However, the mere fact that I hadn’t realized the wrongness of the article until he called it out made me wonder: has the able-bodied population brainwashed me into believing that people with disabilities, people like myself, deserve something less than what our peers deserve? Perhaps.

When I heard of Tim Tebow Foundation’s “Night to Shine,” I couldn’t help but to view it in the exact same light as the incident described above. For those who are unaware, “Night to Shine” is a worldwide event that is designed as an “unforgettable prom night experience, centered on God’s love, for people with special needs ages 14 and older.” Again, at first glance you might not see anything wrong with it, but when you look deeper, you see the event’s true colors.

By making the purpose of the event to make people with disabilities feel worthy, the foundation is supporting the incorrect assumption that having a disability makes a person unworthy of love. I challenge the foundation to extend its invitation for “Night to Shine” to people of all ages and abilities. A truly inclusive prom night would entail teenagers with or without disabilities dancing together, not focusing on their differences. Multiple emails and a written letter was sent to the foundation addressing these concerns, but they did not respond.

I hope to one day see a society where it is not uncommon for a football player to ask a classmate with a disability to the prom, or for there to be a room full of teens with and without disabilities dancing together. Only once this is achieved can we honestly say that our society has full integration and inclusivity. 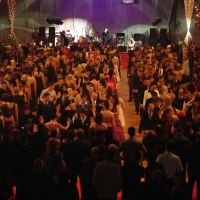