When My Daughter With Down Syndrome Attended Her First School Dance

Friday night the four of us went out for pizza without our fifth family member, Gigi. She had far better things to do: her first school dance. A few weeks ago, a flyer came home in her school folder advertising the annual Snow Ball dance for ages 3 to 6. It is a drop-off event so parents don’t stay. I immediately dismissed it and threw the flyer in the trash.

She can’t go, she’s 3 and has Down syndrome. There’s no way I’m dropping her off at a dance on a Friday night.

A week later, I ran into the director of the school who reminded me of the upcoming Snow Ball.

“This is a can’t miss event,” and she pointed to the flyer for the dance.

“Absolutely send her. ” She continued to tell me how it is such a sweet event and everyone loves it.

I thought about it a lot. Many of the teachers at the school know Gigi and they would be supervising the event. Every morning we walk into school and all of these unfamiliar faces — unfamiliar to me — greet her by name at the door. It’s obvious they appreciate her. But still, I had so many concerns running through my head.

That’s a lot of responsibility they’re taking on to have Gigi at this event.

She’s well behaved, but isn’t it my responsibility to decide if it’s too much and not safe?

Having just turned 3 a couple of months ago, she’ll likely be the youngest there.

Maybe I need to loosen the leash just a little.

This is the added complexity of having a child with a disability. I worry about her like any parent worries about their child, but I feel extra compelled to have her participate so that she can be as much like her peers as possible. Yet at the same time, they may require additional supervision because of their increased dependence.

I decided Gigi had to attend. It became my mission to get her to the Snow Ball. There is no reason for me to hold her back from this social activity just because of her disability. In fact, I felt that Gigi attending this event would mean even more than her going to school. School is expected, even if you have a disability, but social events are a bonus. Social events are where we really test the theory of inclusion. As a parent of a child with Down syndrome, all I want is for her to be included.

The evening of the ball came and we dressed Gigi up. We curled her hair and got her all ready for her fancy event. 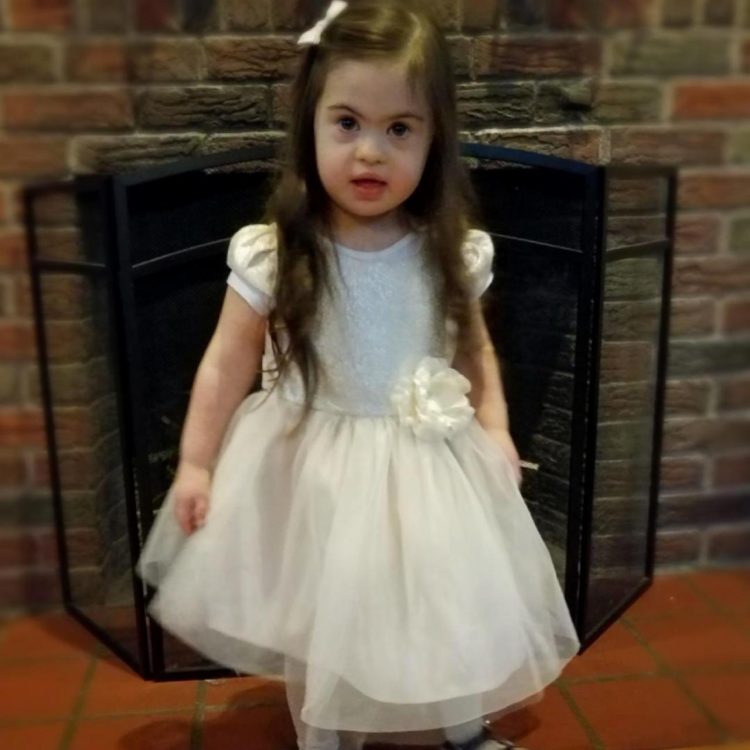 When we walked into the Ball, the entrance of the school gym was festively decorated with giant glitter snowflakes and an arch lit with white lights and lit snowflakes. Kid-sized penguins were everywhere. I took her picture on the red carpet. There were plans for pizza, crafts, dancing and characters. So many people were thrilled to see Gigi who was dressed in her Christmas best. We left her to her party and went out for pizza.

If only I could have been a fly on the wall. I can imagine the fun she had. When we got back to pick her up an hour and a half later, she had just finished dancing. She took a picture in the photo booth with some friends, and they gave her a hug when she was leaving. Her friends. These children get so excited when they see her walk through the door every morning at school and yell, “Gigi’s here!” That night was an example of true inclusion, and I was so thankful that her school gave their students this opportunity.

On Monday morning as I dropped her off for school, a few of her teachers as well as a parent, stopped me to say how much fun Gigi had and how they enjoyed watching her. Apparently she danced up a storm to various Disney music. It’s hard to believe that less than four months ago she wasn’t even walking, and now she’s dancing.

As she heard us talk about her in the hall that morning, Gigi decided to start dancing again.

Gigi, you can dance whenever you want. I hope you have lots of opportunities to dance throughout your life with peers of all abilities, fully included and accepted in all activities, because you deserve it.

This was a great beginning.

Share
or  Copy Link
Link copied to clipboard.
Be first
654