I didn’t realize I was hurting my husband by giving him an “out.”

My husband and I have been through a lot together. We’ve gone through endometriosis, infertility, a high risk pregnancy, a terrifying NICU stay, fibromyalgia, mental illness, myofascial pain syndrome and hypermobile Ehlers-Danlos syndrome.

There’s been a recurring theme in my marriage every time I received a new diagnosis. I’d be scared, I’d cry, my anxiety would get the best of me and I’d inevitably give my husband an “out.”

While talking through my diagnosis and prognosis together, I’d always be sure to include the sentence “if you want to leave, I won’t be mad; you deserve so much more than a sick wife.” Every time I brought it up, he’d be angry with me for even saying it. He’d tell me that he married me for who I was, not what my body was. I just couldn’t understand why. I was giving him an out because I love him so much. I was giving him an out because he deserves everything that life has to offer, and not be stuck at home with a chronically ill wife. He deserves a wife who can carry her share of the housework. He deserves a wife who can be everything I can’t be due to the limitations that chronic pain and exhaustion place on me.

This went on for years. Recently, I was re-reading “The Pillars Of Creation” by Terry Goodkind, and a passage really hit home.

“[Althea said] ‘Yet I suffer each day because it was not just my life forfeit, but Friedrich’s, too. He might have-‘ ‘I might have nothing.’ He had come up behind Jennsen. ‘I have considered each day of my life a privilege because you are in it. Your smile is the sun, gilded by the Creator Himself, and brightens my small existence. If this is the price for all of that I have gained, then I paid it willingly. Don’t devaluate the quality of my joy, Althea, by minimizing it or trivializing it.’”

I read that passage, and burst into tears. I was ashamed that is exactly what I was doing to my husband, the man that I love. I wasn’t being noble by giving him an out, as I thought I was – I was devaluating his joy, by both minimizing and trivializing it. I was in effect, telling him how to feel. I was not allowing him to tell me his perception of my illnesses, I was attempting to force my perception onto him. I was, in effect, disregarding his feelings and instead telling him how he should feel.

I was ashamed when I showed him that passage. My heart broke when he looked at me with tears in his eyes, and whispered, “Now you understand how I feel.”

I realized that by trying to “help” my husband by offering an out, I was actually hurting him. He struggles with the uncertainty of my future with hEDS just as much as I do – but not for himself. He struggles with that uncertainty because he loves me, and doesn’t want to see my pain and joint instability increase. He struggles when I’m in pain, because he desperately wants to make the pain stop, and he can’t. By offering my husband an “out,” I was completely disrespecting his feelings. I was minimizing his pain. I failed to understand that he was hurting too.

In that moment, I vowed that “if you want to leave, I won’t be mad; you deserve so much more than a sick wife” would be a thing of the past. I wasn’t going to be offering an “out” anymore. I would be instead cherishing the fact that the love of my life wanted to stay by my side through the pain and uncertainty.

Whatever happens will happen, and we’ll face it the way we should be – together. 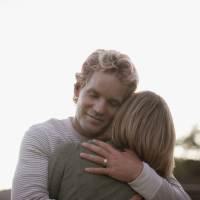