Trying to Explain Endometriosis to My Young Kids

This time last month, things were different. I was in constant pain, I had a hard time doing easy everyday things with my kids, etc. Now, I have a brighter outlook on the future and present. But talking to my kids about the hard days, the bad pain days, was something I never thought about. I honestly wasn’t sure if they’d really notice – but, of course they did. It’s hard for my 6-year-old to verbalize things sometimes because of his autism, but all of a sudden, I started to get more attention from him, more hugs, more kisses, more attention in general. My 4-year-old was the same, except he was able to vocalize his concerns with me.

Momma, why does your tummy hurt?

Momma, why do you have to see the doctor all the time?

That last one though, the “what’s wrong” – my heart really sunk deep down into my chest on that one. How on Earth was I going to explain something as complex as endometriosis and interstitial cystitis to my kids? My mind spiraled, and I began to put so much pressure on how I was going to explain it, when in reality all I really needed to do was open my heart and start talking to them about it. I needed to say something.

Some days Momma doesn’t feel good in her tummy.

The doctors are trying to help Momma feel better so she can run and play with you.

Momma has something called “endometriosis,” and it makes her tummy hurt sometimes.

These are all things I said. I didn’t want to get too complex. I can explain it to them when they’re older. But I did want to lay the foundation because I think it’s important for them to be in the loop, and even though I didn’t think they had any idea what was going on – they did, and it wasn’t fair of me to hold out so long without openly communicating that with them. Once I finally let go of that heavy fear of holding the perfect conversation, it became easier for me to talk about and relate this to my kiddos. And you know what? They totally got it, in their own way.

Now on bad pain days, Wyatt kisses my stomach. Because he gets that it’s hurting me, and as his sweet-and-loveable self, I should have expected it.

Now on bad pain days, Levi gives me extra hugs and snuggles, and rubs my stomach. He says he rubs my stomach because I rub his back when he doesn’t feel good – and that always helps him feel better.

My kids, my family, they’re my whole heart. So why wouldn’t I be honest with them? To be 100% honest, opening up and talking to the kids about what I was going through has only made our relationship stronger. It’s made me really cherish the good days, and I think they do too. I also love the fact that their first response to me having something wrong with me was to love me more. Man, does that feel good. Man, does it feel good to have kids with such great hearts – because all of that extra love and attention from them really has such a strong impact.

I never want them to feel like they’ve got to take care of me. I never want to hold them back from doing something just because I can’t. But the way they’re wanting to care for me, by doing little things – that really warms my heart. So, if you’re in the same spot as I am, even if you live with something that isn’t endometriosis or interstitial cystitis, when you’re ready, be open to communicating. Even if it’s in the simplest terms, it’s worth it.

Some days Momma doesn’t feel good in her tummy.

The doctors are trying to help Momma feel better so she can run and play with you.

Momma has something called endometriosis, and it makes her tummy hurt sometimes. 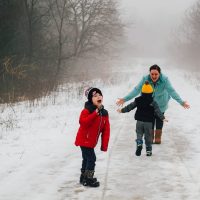