A few months ago, I started attending a support group for other college students with chronic illnesses. It was great getting to talk with people who could relate to what I was going through, but one of the most common complaints of everyone else in the group was that their friends didn’t understand what it was like living with a chronic illness.

As I sat there, I felt bad that I didn’t have this problem. Overall, a majority of my friends are incredibly supportive. The more I attended the group, the more I realized the attendees wanted their friends to know exactly what they were going through without having to explain it to them. When the counselor leading the group asked why it seemed my friends were more supportive, I told her it was because I was always extremely vocal about what I was going through, and I recognized early on that my friends would never be able to know exactly what it was like to have Crohn’s disease. Unfortunately with chronic illnesses, you just don’t know what it’s like unless you have it.

When I was first diagnosed with Crohn’s disease as a sophomore in college, I texted and Snapchatted my friends the news as soon as I left the doctor’s office. A few were shocked, but most of them already knew I was sick with something, just none of us knew what. Over the next few months, I opened up and let my friends, ranging from class acquaintances to my childhood best friend, know about my newfound diagnosis.

There were some bumps in the road at first. One friend asked me if it was contagious, and one made a comment that I was lucky I could lose weight so easily. Another was extremely scared and asked me if I was going to die. For a while, most of my friends’ main concern was if I was going to be well enough to drink alcohol on my 21st birthday, when that was probably the last concern on my mind. While those things frustrated me, I realized they just didn’t understand what I was going through, and just like my diagnosis was a learning curve for me, it was a learning curve for them as well.

I know my friends will never know exactly what it’s like to have Crohn’s disease, and I would never want them to because that would mean they’d have to be diagnosed with it too. I also know my friends don’t need to have Crohn’s to be supportive of me. There are always the slip-ups, like when someone forgets I don’t drink alcohol or that I can’t eat pizza, but those are minor moments that just take a quick reminder. I don’t mind reminding them because they offer to hold my hand during my loading dose of medication. They know I get dibs on the bathroom when traveling and let me pick the restaurant when we go out to eat. They listen to me vent and visit me after surgeries. They do all of this for me while I support them with whatever they are struggling with, because that’s what friends do.

In life, there will always be people who choose not to be there for you, but I’ve learned the right people will step up when needed… if you let them. The only way people can help you is if they know what’s going on, and that only comes with honesty and patience. No one’s life experiences are universal, and once I stopped holding my friends to an unrealistic standard I found it was a lot easier to appreciate their support. I learned to let them support me in whatever way they can, while trying my best to articulate what I need. Having a chronic illness can make or break you, but having a strong support system can lift you up on days you can’t carry yourself.

Share
or  Copy Link
Link copied to clipboard.
Be first
272 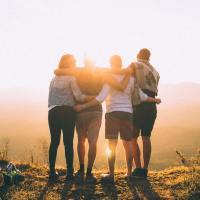