Before I became unwell I didn’t really use social media that much. Don’t get me wrong, I’d love a good Facebook snoop every now and then… post the odd cat picture or selfie on Instagram once a month… but that was about it! When I started to get really poorly and inevitably more isolated I found all social media to be extremely triggering. When you’ve gone from being employed, busy, happy and healthy to having to put a career you love on hold for who knows how long, spending 90 percent of your time at home in agony, it can be really difficult to watch everyone else’s lives around you progress. People’s job promotions, engagements, wild nights out, holiday pics… the list goes on… are constantly shoved down our throats with every scroll, and while I don’t want to be bitter and I am genuinely happy for those people, it’s hard not to feel sad sometimes. I am only human after all.

I started to use social media less and less to avoid being triggered but this just made me feel more isolated. My depression got worse and I’d honestly never felt so lonely in my entire life – ever. You see, the problem is when you’re a young adult and chronically ill, it’s pretty rare to find someone else in your “real life” whom you can relate to so you start to feel really alien around your loved ones.

In a desperate attempt to tackle the consuming loneliness, I went to a local support group for one of my conditions (interstitial cystitis) hoping it would help, but everyone there was 30+ years older than me and I couldn’t really relate much to any of them. It wasn’t until one day a couple of years back now I randomly used the hashtag #chronicillness on one of my Instagram posts (I’d seen people use hashtags before but didn’t know how they actually worked) and all these new people started to appear on my page, liking posts and leaving encouraging, supportive comments. I then realized that all of these people were in similar situations as me. I was so shocked – who knew a hashtag could be so powerful?

From that day on I have used hashtags to connect with thousands of people all over the world who are chronically ill. I’ve made friends I’ll have for life, been given priceless advice over the years, learned so much about my own illnesses from other people and most importantly I no longer feel alone anymore. I know a lot of healthy people won’t understand or even think bad of us for using social media so much. I’ve heard things like “if she can be on IG all day she can get a f’ing job!” But the thing is an IG/FB/Twitter account is an actual lifeline for some people. I honestly don’t know if I’d be here today without the friends I’ve made through my Instagram account. It’s a way of feeling part of something even when you’re stuck in bed, a community, being productive in some way by spreading awareness without having to commit to anything, and unlike a job, if we aren’t up to posting for a few days, weeks, months, even years we aren’t going to get the sack for it!

Share
or  Copy Link
Link copied to clipboard.
Be first
108 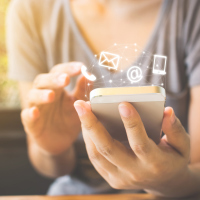