How Sushi Relates to My Upcoming Heart Transplant

At the corner of 22nd and Brandywine Streets in Philadelphia, there is a Japanese restaurant called Umai Umai. With about 10 tables and a sushi bar, it’s something between a hole in the wall and a bigger restaurant. Nestled in a residential neighborhood, and away from the busy streets and parking garages of Center City, it is certainly off the beaten path. But, it is always busy, and it is always difficult to get a reservation. That’s because the sushi is good. Really good. Not only do they have your classic nigiri and sashimi, but they also create very inventive rolls. Rolls like the Henrietta are delicately crafted with lobster tempura, mango, spicy tuna tartare, avocado, cashew, and eel sauce. The 4-8-15-16-23-42 roll (also known as the “lost” roll) combines tuna, salmon, yellowtail, avocado, mango, and romaine lettuce wrapped in pickled daikon.

Last Saturday evening we ate at Umai Umai. It was busy as always but didn’t seem overly busy, likely because the snow that was falling was wet and heavy and mushy. Still, the only reservation we could get was an 8:15 p.m. at the sushi bar. As we ate, the place began to slightly empty out, leaving a table here and there vacant.

“We probably could have sat at a table if we waited a few extra minutes,” Ashley said. But I was just as happy at the sushi bar, if not happier than sitting at a table.

To really get the full experience of sushi, you have to sit at the sushi bar. You have to watch the sushi chef craft your sushi right in front of your eyes. The way the rice is balled together, the fish expertly sliced. It can, at times, be mesmerizing even. It all seems like a fairly simple process. Even the more complex rolls seem simple when you watch a sushi chef lay out the seaweed and roll everything together tightly with the use of a bamboo mat.  Everything about sushi is well thought out by the chef, from the texture of the rice to the temperature at which the dish is served. You’re supposed to eat it quickly so that the conditions of the air around you don’t have a chance to change the overall texture and experience of the sushi itself. It all seems simple because these chefs are experts at what they do. But, a piece of nigiri or a roll is meant to stand on its own, meant to be crafted together so well that in reality, you shouldn’t need to dip in soy sauce or add extra wasabi. It’s no wonder that Japanese chef Nobu Matsuhisa has said, “Making sushi is an art, and experience is everything.”

If you were to ask my doctors, they’d probably say that I should not be eating sushi. Because of my congenital heart defect and because of some of the medications I take, I am slightly immunosuppressed. In other words, my immune system is not at 100 percent strength. And sushi, being raw fish, can contain bacteria that would be otherwise cooked out if it were not served raw. They would say the same thing about raw oysters, but I love those too – another food that takes time to prepare and while they are typically shucked and served over ice, there also seems to be a craft in preparing oysters. Stop in at an oyster bar sometime and watch how they are shucked. It takes precision, it takes skill, and it’s fascinating to watch.

If you can’t already tell, I love good food. It’s not limited to sushi and oysters, but anything tasty really. And lately, anything low sodium.

After my transplant, I will be even more immunosuppressed, and I will be immunosuppressed for the rest of my life. And, while to this point of my life, I have always felt I knew my body better than anyone and did a lot of things my doctors would probably say I shouldn’t – eating sushi, eating oysters, riding roller coasters, drinking caffeine, drinking alcohol – I have to remember that post-transplant, I will no longer know my body better than anyone. That means no sushi, no oysters, and meats cooked to the proper internal temperature, even if that means I have to eat steak well-done.

As I mentioned before, a piece of nigiri is meant to be its own isolated experience. For as simple as sushi seems, the rules for properly eating it are long and complex. For example, if you absolutely must dip your sushi in soy sauce (I’ll admit, I do it), then make sure you dip the fish part and not the rice. Ginger is meant to cleanse your palate between pieces of sushi, it is not meant to be used as a topping. Wasabi should never be mixed into the soy sauce. It is acceptable to eat sushi rolls with your fingers, but you should always use chopsticks on nigiri. But, if you’re among friends, you can use your fingers for anything.

Similarly, a heart transplant is seemingly a simple concept. Take out the bad heart, replace it with a new, good heart. But under the surface, it is extremely complicated, especially if you’ve already had multiple open heart surgeries. You are at increased risk for bleeding. There is more scar tissue. It takes two cardiothoracic surgeons to complete the procedure: a pediatric surgeon to navigate opening the chest and removing the heart, and an “adult” surgeon to complete the transplant. Post-transplant, there are many rules to living life. What you can eat and what you can’t. Wearing a mask in crowds and on planes. No swimming in lakes.

I don’t remember how old I was the first time I had sushi, maybe 12 or 13 yearsold. But, I remember the experience. I was out with a friend and his mother and we stopped for lunch at a restaurant in Newtown, PA, called Oishi. They put a piece of paper in between the chopsticks and wrapped the end with a rubber band so they’d be easier to use. We ordered so much that they brought it out on a wooden boat. I’m sure I used a lot of soy sauce, and probably too much wasabi and learned the hard way that it was spicy, but that it was great for clearing out your sinuses. I quickly learned to love Ebi, Maguro, Sake, and Hamachi. Years later I’d also learn to love Toro, which is actually the endangered blue fin tuna, and the way it just melted off the chopsticks. Regarding Toro, my mother would always tell us not to order it because:

But, our excuse would always be something like, “Well it’s already dead, might as well not waste it.” Morbid, I know.

If you do choose to dip your sushi or nigiri in soy sauce, you are supposed to dip the fish side and not the rice. Here’s why: It’s because the rice, not the fish is actually the main and most important ingredient of sushi. In an interview with Food Republic, Chef Seki explains that “even though we all use seasoned vinegar rice, the style is totally unique to each sushi chef. Each sushi chef has his recipe based on the temperature he or she uses to cook and serve the rice, the seasoning and the aroma they create based on the amount of vinegar.

Back at Umai Umai, I must have zoned out while we were waiting for our food because Ashley said something like, “What are you looking at?” or, “Anyone in there?” As we were sitting at the sushi bar, I was watching the sushi chef create nigiri and rolls. Watching him scoop out the rice, slice the fish, lay out the seaweed wraps. It will never get old.

If you go to a place often enough, and at times when the restaurant is not busy, it’s easy to strike up a conversating with the sushi chef. It’s easy to ask about their craft, where they come from, how long they’ve been making sushi, where they trained. In my experience, sushi chefs are some of the friendliest people you’ll meet. It adds to the atmosphere and experience, and while each piece of sushi or nigiri is supposed to be an isolated experience, the act of eating sushi is best enjoyed among friends and family. In a way, it’s sort of like going to a bar for a pint of beer. It’s a shared experience, a common language. But, it can also be enjoyed alone. Many times I have seen people by themselves, slowly eating a roll, deep into a novel. Getting lost in the pages and in the sushi.

It’s weird to think that it’s possible I may have already had my last piece of sushi, my last oyster, my last medium-rare ribeye. I may have watched a sushi chef intricately compose a piece of nigiri for me for the last time.

I just hope my surgeons don’t drown their sushi in soy sauce. 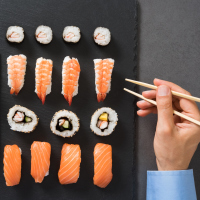