My name is Tom Bak and I am a young adult with autism. I attended the United Nations World Autism Awareness Day conference on April 5, 2018. The focus of this year’s conference was Empowering Women and Girls with Autism. Empowering women and girls with autism is an important topic because many women with autism face significant discrimination and are vulnerable to abuse. This topic is important to me because a lot of my friends are girls with autism, and I want to see them have equal opportunities when they go out into the world. The theme of the day also had relevance to me because those of us in the autism community are often at risk for abuse and exploitation. We all need to be aware of the risks people with autism face.

The opening remarks of the conference were delivered by the United Nations General Assembly President Miroslav Lajcak. President Lajcak addressed the stigma of autism and how that affects women on the spectrum throughout the world. He discussed the goal of providing equal access to early intervention for girls with autism. Many girls with autism miss out on early intervention because they often don’t get diagnosed until they are adults. When women do receive an autism diagnosis, it often brings stigma which can create barriers for them to finding employment and gaining access to education. 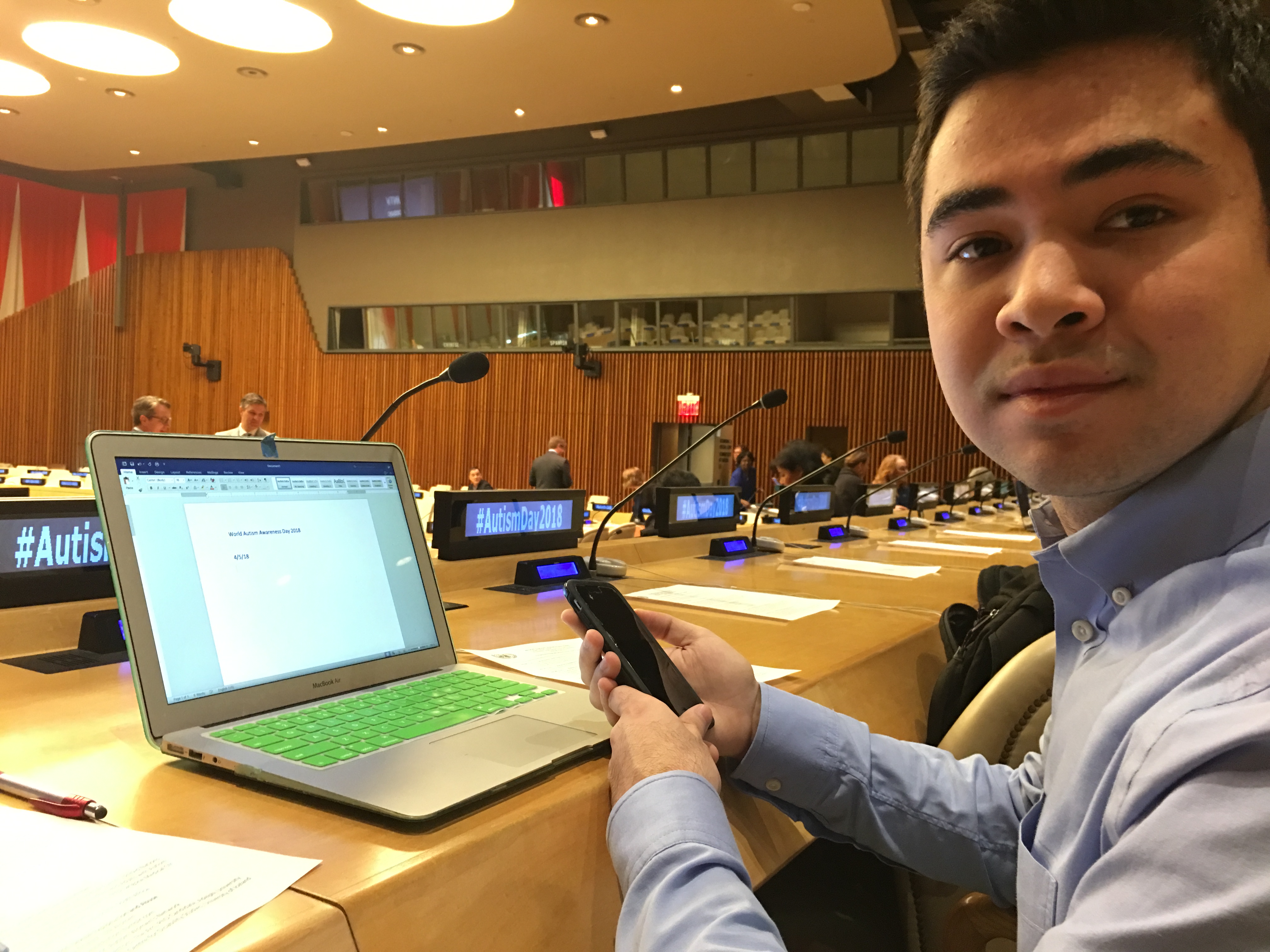 The Keynote Address was delivered by Julia Bascom, Executive Director of the Autistic Self Advocacy Network. Ms. Bascom talked about how women with autism all over the world are often subjected to violence.  Professor Jonas Ruskus, a member of the United Nations Committee on the Rights of Persons with Disabilities, reflected the statements made by Ms. Bascom. I felt upset when he talked about the violence women with autism often face because of their disability. One of these risks is sexual exploitation. He stated that women and girls with autism are at greater risk for sexual abuse, assault or harassment. He said the UN Committee on the Rights of Persons With Disabilities is working to give women with autism equal opportunities and to protect their human rights. The United States is on the Committee of the Rights of Persons With Disabilities, but has only ratified five treaties, which is
less than other countries in the world. I think we could do better here in the U.S.

The second panel of the conference addressed Women wWth Autism in Film by talking about the movie “Please Stand By.” The film is about a young woman with autism who goes out into the real world in an effort to submit a movie script she wrote. The main character Wendy was played by actress Dakota Fanning. I thought it was awesome that Dakota Fanning attended this conference to talk about her role in the film. Ms. Fanning discussed how it was a new opportunity for her to play a character who is on the autism spectrum. Britannie Sanders, an actress with autism and member of the Miracle Project, was also on the panel. Ms. Sanders, who had a role in the film, stated that she related to the character Wendy because she never gives up. This was my favorite panel of the conference because it focused on a movie about a woman with autism and included supporting actors who were actually on the autism spectrum. I liked that characters with autism were played by actors with autism because I think this provides a more accurate depiction of individuals with autism in cinema.

The final panel of the conference addressed the subject of the “Four Es” which are Education, Employment, and Economic Empowerment. I appreciated the statements made by two of the panelists, adult women with autism. Rachel Wilson, a student at Mercyhurst University, spoke about the road she traveled to get into college and how she wants to work at a museum once she graduates. Ms. Wilson described how hard it was for her to fit in when she was in high school. Tara Curry, a contractor for a New York financial firm, reflected Ms. Wilson’s statements about fitting in. Ms. Curry stated when she was in high school, people looked at the kids who were “out” about being on the spectrum as weird.

Ms. Curry’s and Ms. Wilson’s statements struck a chord with me. I struggle with being open about my autism. Being open about having autism can put us at risk of being bullied and facing discrimination. Ms. Curry stated the benefit of being open about having autism is that other people can better understand us. There were times in the past when I hid my autism from others because I worried people would judge me negatively and think I was “stupid.” As I’ve gotten older, I realized it wasn’t worth hiding. Being open allowed me to meet people who are nice and who understand and accept me.

I am grateful to the United Nations for creating the World Autism Awareness Day conference that addresses critical issues related to autism.  This conference is important because it brings people together to talk openly about issues like Empowering Women and Girls with Autism and the stigma people with autism face.  We can’t change stigma and the barriers it creates if we stay in the closet. We have to be out if we’re going to make a difference and create a better environment for all people on the autism spectrum.