How My 7-Year-Old Educates His Classmates About Autism

My 7-year-old son recently asked me how many surgeries he had to have before we realized he had autism. It was a reminder to me of how little any of us really understand autism. In truth, trying to explain his diagnosis to him was hard. It’s so… open-ended. It’s a spectrum, right?

During the same conversation about the amount of surgeries it took to determine his diagnosis, my son told me he met a boy whose brain worked differently, too: “He has… hamburger something?”

And the confusion builds.

What does autism mean?

In 1908, the term was created by Eugen Bleuler to describe his withdrawn schizophrenic patients.In the DSM-V, it’s categorized as Autism Spectrum Disorder 299.0.

The Oxford Dictionary defines it as a mental condition, present from early childhood, characterized by difficulty in communicating and forming relationships with other people and in using language and abstract concepts.

What does autism mean?

Here’s what I know:

My son has autism, so it is a word that is very personal to me. Even more so to my son. He wants to understand himself. Ultimately, I can only share with him what limited knowledge our medical field currently has while they continue to test hypotheses and make claims that may or may not be accurate.

In the meantime, what we all have, are our stories. Stories of our own experiences with autism, whether it be directly or as a loved one.

My son, at 7 years old, had the courage to share his story to his entire first grade class. With help, he created a Google Slide Presentation, read from it using the classroom’s Smartboard, and answered questions from his peers. He even redirected the class when they got a bit off-topic (Who’s your favorite Pokemon?) by moving back to a specific slide and asking, “OK, who has a question about autism?”

In our house, autism means being brave.

What raising a child with autism has taught me is that we shouldn’t avoid talking about it. We shouldn’t be embarrassed or afraid; autism is another way of thinking and viewing the world. It may look differently or feel different or act different from what our society views as “normal,” but that doesn’t make it less. In fact, as I’ve come to learn, it makes life more.

I ask all of you, not just this month of Autism Awareness, but from now on, to not be afraid to talk about our differences with our children. If you don’t know the answers, let them know. Then go find those answers with them. If you shy away from the hard questions, “What’s wrong with that kid? Why is he spinning around and flapping his arms?” You are inherently teaching them that what they see is something to be afraid of. Fear stems from a lack of knowledge.

Sharing stories can ease that fear.

My son, and so many others like him, are a living symbol of autism. It can be a badge of honor. I ask all of you to lighten his load. Accept him. Love him. Embrace him.

Continue to share and to listen so the stigma and fear and frustration surrounding autism can fade.

Share
or  Copy Link
Link copied to clipboard.
Be first
214 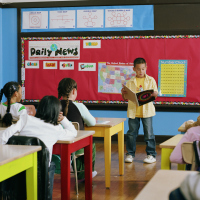