Hooked on Phonics Did Not Work for Me

I still remember the Sunday morning I sat on my parents’ bed as they told me why all my academic struggles made sense. As I sat on the bed I listened to them say a lot of big words I didn’t understand. Little did I know at 7 years old that those words would empower me to persist in what I thought was an impossible effort. I would become inspired in everything that I struggled in, and when I struggled I would think about what Ralph Waldo Emerson said, “That which we persist in doing becomes easier to do, not that the nature of the thing has changed but that our power to do has increased.” The nature of my dyslexia has not changed, nor will it ever, but my power to do has.

Before I knew I was dyslexic, I dreaded going to school. I dreaded being separated into the lowest reading level, and I dreaded spelling tests, because they were just a way for teachers to tell me that I was a failure. I was a failure who couldn’t even say her alphabet until the third grade. I lived in fear of being held back. I was afraid of being inferior to my classmates, and being the kid who needed “extra help.” As a child my dyslexia defined me, and I didn’t even know what it was. I didn’t know it was the reason I couldn’t spell or couldn’t learn as quickly as my peers, but I did know I was “too dumb” to read the same Magic Treehouse books as the rest of my classmates. I did know my teachers thought I was “stupid,” and they thought I didn’t try. They didn’t seem to know I wanted to be smart. I wanted to be able to read the Magic Treehouse books. Every night I would study that spelling list. I would study until I got all the words right, but when it came time for the spelling test, the words I studied all week would be completely foreign to me. Just as foreign as the concept of phonics.

After I found out I was dyslexic, my whole life was altered. I would come home after a day of struggling in school and work on Hooked on Phonics. I worked from 3 p.m. to 7 p.m. and I was still unable to sound out words or even comprehend the idea. I worked on my reading, writing, and spelling as the years passed. It became apparent to me that my solution wasn’t practicing my vowel sounds with a tape recording. I was stuck battling the bigotry of my mental disability, and I often asked myself why are my efforts fruitless? Why am I wasting my time studying when I know nothing is going to change?

After asking the same fruitless questions throughout the years, I realized I can’t be defined by something as arbitrary as dyslexia. My dyslexia can’t own me; it can only empower me, and I learned that hard work is stronger than any trial or tribulation I face. I still have no phonics and spelling is a struggle, but through countless hours of studying, tears, and determination I can proudly say I have never read a Magic Treehouse book. But I have read “Pride and Prejudice,” “Tuesdays With Morrie,” and “To Kill a Mockingbird.” These critically-acclaimed books have changed who I am by teaching me lessons of humility, self-respect and honesty — but none have changed me as much as those Magic Treehouse books. Even though I have never read a Magic Treehouse book, they taught me that I can overcome any obstacle, and no matter what my teachers, peers or counselors say, I’m not a failure.

The nature of my dyslexia has not changed, but my power to do has forever changed. Through these struggles I’ve worked twice as hard in order to never feel inadequate again. My dyslexia will always be a struggle, but it will serve as a reminder of what I’ve overcome and what I am capable of overcoming with hard work. 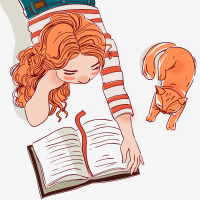