Jamie Myrah joined PHA Canada as the organization’s first Executive Director in January 2016. She is responsible for overseeing all of their operations, including providing support and guidance to the staff in delivering programs and services. She also works closely with the Board of Directors on governance, strategic planning, public and government relations, and fund development. She works closely with Canada’s PH community to create changes that improve the lives of all those affected by pulmonary hypertension. In this episode, Jamie discusses PHA Canada’s 10 year anniversary.

I’m Jamie Myrah, and I’m the Executive Director of the Pulmonary Hypertension Association of Canada. I am based in Vancouver, British Columbia.  I joined the organization just over two years ago, and I’ve been working in rare disease communities specifically for the last five years.

Well, my background is really originally in HIV. Eventually, over the years, I’ve worked in cancer and chronic disease prevention. After spending some time in law school and returning to Vancouver looking to get back into the community based health sector, an opportunity came up in rare disease. What I found really ended up attracting me to rare disease communities was the commonality that I felt to my experience in HIV. That very grass roots, driven, “nothing about us without us” culture, was very appealing to me. It felt very comfortable and really fed my desire to work on issues, in particular around health inequities. I think the connections between PH and other disease communities, including rare disease communities is one of the unique and interesting things about the work.

April 1st was PHA Canada’s official 10 year anniversary. Throughout this month, we are celebrating online in communities across the country and then looking forward to many other interesting and fun activities throughout the year. Of course, you know, in Canada, we’re a multiethnic, multilingual, multicultural country, and we do as a national organization operate in both official languages of English and French. All of our materials including for the anniversary and the special edition anniversary website are all available in both languages. We look forward to celebrating with our friends in Quebec, as well.

In terms of some of the differences that exist around the country, we’re quite fortunate in that we have a fantastic network of expert PH centers right across the country. That doesn’t mean that there aren’t barriers to accessing that treatment for folks especially who live in really rural and remote communities. But if you’re in a major center then you’re fortunate enough that you have expert care available right there likely in your hometown. But when it comes to actual medications, we are increasingly starting to see some differences in accessibility from province to province. I think historically, for the most part, people have had decent access to the first generation therapies. But as the PH landscape changes, as the drug approval process becomes more complicated and as there’s more and more rarities, these drugs to be paid for by public payers in particular, it’s becoming more difficult, and we are seeing differences in availability of new drugs in different parts of the country.

I think most recently one of the exciting things that has happened is that we have seen new approvals for new drugs happen very recently, and I think that is, at least in part, a direct result of the PH community working really hard over the last two years to educate their elected representatives and the decision makers in their provinces about the importance of these new therapies, especially when there’s novel therapies coming to market. They’ve really taken a lot of leadership, patients have been really committed to getting their stories out there. We’ve started to see some progress. I think that has been an exciting win for us in a sense recently. That being said, there’s a lot more to be done. Like I said, when we see progress in some areas, it also makes the lack of progress in other areas sometimes even more stark as we start to see these real differences occur.

One of our other main focuses right now is around educating healthcare providers around PH and really raising awareness around the diagnosis of PH with the aim of reducing delays to diagnosis. We launched a new renewed website for our “Sometimes It’s PH” campaign. We’ve got new materials that we’re working really hard on getting out into the community. For instance, this month we exhibited at the Canadian Respiratory Conference where we had and exhibit there and educating all of the doctors present about PH. Not just its diagnosis but also on how to then refer patients to the expert care centers that do exist across the country.

We’re super excited that World PH Day is just right around the corner. We’ve got several things on the go. I think most excitingly for us here at the head office in Vancouver is that this year we’re going to be having an in person event here in Vancouver. We’re going to be returning to the public promenade of the central branch of the Vancouver Public Library, where the organization actually had a big awareness event back in 2012. We’re going to be returning to this location, which is a great high visibility, high public area. We’re going to have a public awareness event using the six minute walk test and some other activities that we have right there in the public promenade. In addition to that, we’re also going to be inviting our local community members, our patients and their families to come out and join us for a short program where we’re going include a research update from the folks at the Vancouver clinic and then also continue to celebrate our anniversary.

In addition to that, we are going to be once again this year having our Paint Canada Purple public illumination campaign where we see monuments lit up in purple throughout the country. Once again, raising awareness in those communities for World PH Day. Finally, we are always looking forward to the activities of our community members who often use World PH Day as an opportunity to raise awareness but also to raise funds for PHA Canada. This year, in particular we have a fantastic event happening in Ottawa, Ontario where they are having their first ever masquerade ball in support of PH including PHA Canada.

The special edition anniversary website can be found at phacanada10.com, in both English and French. I encourage people to come the anniversary website where we’re going to be recognizing the folks that really built this organization over the years and who’ve been instrumental to providing patient support, education, building awareness in Canada. We invite you to join us there and celebrate those leaders and thank them for ensuring that today in Canada when you’re diagnosed with PH there’s a place for you to turn and you will never have to face PH alone. 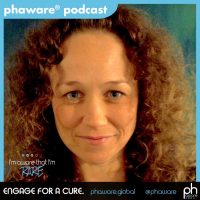